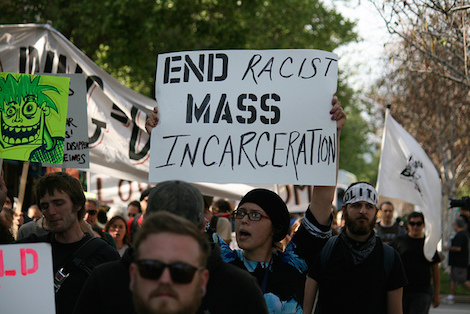 I have no idea if it was a coincidence that the recent editions of both the National Review and the Atlantic focus on the topic of mass incarceration and criminal justice reform (I doubt it). But some of the articles sure make for some interesting side-by-side reading, which is what I did with the headline articles by Stephanos Bibas in the National Review and Ta-Nehisi Coates in the Atlantic.

Not all of Bibas’ recommendations for criminal justice reform are awful. But I sure do hate how he ended his piece.

American criminal justice has drifted away from its moral roots. The Left has forgotten how to blame and punish, and too often the Right has forgotten how to forgive. Over-imprisonment is wrong, but not because wrongdoers are blameless victims of a white-supremacist conspiracy. It is wrong because state coercion excessively disrupts work, families, and communities, the building blocks of society, with too little benefit to show for it. Our strategies for deterring crime not only fail to work on short-sighted, impulsive criminals, but harden them into careerists. Criminals deserve punishment, but it is wise as well as humane to temper justice with mercy.

Perhaps I was primed to react to that when, earlier in the article, Bibas said this:

Contrary to the liberal critique, we need to punish and condemn crimes unequivocally, without excusing criminals or treating them as victims. But we should be careful to do so in ways that reinforce rather than undercut conservative values, such as strengthening families and communities.

The premise for those arguments rests on an old caricature that, when it comes to criminal justice policy, liberals see victims in need of rescue while conservatives see criminals in need of punishment and/or accountability. I get really tired of that either/or dichotomy that is used as a straw man against liberals, many of whom have long advocated for being “smart on crime” by embracing a both/and. Perhaps that’s why his last sentence about tempering “justice with mercy” bothered me so much. I’m all for injecting a little more empathy and compassion into our criminal justice system. But mercy seems to be more about providing the giver with a sense of benevolence rather than recognizing that treating offenders as human beings means finding out what works, i.e. being smart on crime.

My other big problem with the Bibas article is that, when it comes to race and mass incarceration, he basically says, “nothing to see here…move right along.” Rather than addressing the overwhelming data on racial disparities in the criminal justice system, he backs this up by saying that African Americans want enforcement against crime too (duh) and that a lot of Black leaders were involved in promoting the tough-on-crime initiatives of the 90’s (as if that makes the outcomes non-racial).

That’s exactly where Coates comes in strong. My one big critique of his article is that it is so long and filled with so much information that the very people who need to read it the most probably won’t. But in response to Bibas’ ridiculous notion that mass incarceration has nothing to do with race, let’s take a look at just a little of the history Coates provides. Here are some excerpts from his section on “the crime stained blackness of the negro.”

In 1860, The New York Herald offered up a dispatch on the doings of runaway slaves residing in Canada. “The criminal calendars would be bare of a prosecution but for the negro prisoners,” the report claimed. Deprived of slavery’s blessings, blacks quickly devolved into criminal deviants who plied their trade with “a savage ferocity peculiar to the vicious negro.” Blacks, the report stated, were preternaturally inclined to rape: “When the lust comes over them they are worse than the wild beast of the forest.” Nearly a century and a half before the infamy of Willie Horton, a portrait emerged of blacks as highly prone to criminality, and generally beyond the scope of rehabilitation. In this fashion, black villainy justified white oppression—which was seen not as oppression but as “the corner-stone of our republican edifice.”

“From the 1890s through the first four decades of the twentieth century,” writes Khalil Gibran Muhammad, the director of the Schomburg Center for Research in Black Culture at the New York Public Library, “black criminality would become one of the most commonly cited and longest-lasting justifications for black inequality and mortality in the modern urban world.” Blacks were criminal brutes by nature, and something more than the law of civilized men was needed to protect the white public. Society must defend itself from contamination by “the crime-stained blackness of the negro,” asserted Hinton Rowan Helper, a Southern white-supremacist writer, in 1868. Blacks were “naturally intemperate,” one physician claimed in The New York Medical Journal in 1886, prone to indulging “every appetite too freely, whether for food, drink, tobacco, or sensual pleasures, and sometimes to such an extent as to appear more of a brute than human.”…

In 1904, defending southern states’ lack of interest in education funding for blacks, James K. Vardaman, the governor of Mississippi, offered a simple rationale, as one report noted: “The strength of [crime] statistics.”

The reasoning was unoriginal. “The use of cocaine by unfortunate women generally and by negroes in certain parts of the country is simply appalling,” the American Pharmaceutical Association’s Committee on the Acquirement of the Drug Habit had concluded in 1902. The New York Times published an article by a physician saying that the South was threatened by “cocaine-crazed negroes,” to whom the drug had awarded expert marksmanship and an immunity to bullets “large enough to ‘kill any game in America.’â€‰” Another physician, Hamilton Wright, the “father of American narcotic law,” reported to Congress that cocaine lent “encouragement” to “the humbler ranks of the negro population in the South.” Should anyone doubt the implication of encouragement, Wright spelled it out: “It has been authoritatively stated that cocaine is often the direct incentive to the crime of rape by the negroes of the South and other sections of the country.”

Elijah Forrester, a Democratic congressman from Georgia, opposed the Eisenhower administration’s 1956 civil-rights bill on the grounds that “where segregation has been abolished,” black villainy soon prospered. “In the District of Columbia, the public parks have become of no utility whatever to the white race,” Forrester claimed, “for they enter at the risk of assaults upon their person or the robbery of their personal effects.” Unless segregation was immediately restored, “in 10 years, the nation’s capital will be unsafe for them in the daytime.” Around that time, Basil Whitener, a North Carolina congressman, dismissed the NAACP as an organization pledged to “the assistance of Negro criminals.”

Nixon’s war on crime and drugs:

Nixon’s war on crime was more rhetoric than substance. “I was cranking out that bullshit on Nixon’s crime policy before he was elected,” wrote White House counsel John Dean , in his memoir of his time in the administration. “And it was bullshit, too. We knew it.” Indeed, if sinking crime rates are the measure of success, Nixon’s war on crime was a dismal failure. The rate of every type of violent crime—murder, rape, robbery, aggravated assault—was up by the end of Nixon’s tenure. The true target of Nixon’s war on crime lay elsewhere. Describing the Nixon campaign’s strategy for assembling enough votes to win the 1972 election, Nixon’s aide John Ehrlichman later wrote, “We’ll go after the racists … That subliminal appeal to the antiblack voter was always in Nixon’s statements and speeches on schools and housing.” According to H. R. Haldeman, another Nixon aide, the president believed that when it came to welfare, the “whole problem [was] really the blacks.” Of course, the civil-rights movement had made it unacceptable to say this directly. “The key is to devise a system that recognizes this while not appearing to,” Haldeman wrote in his diary. But there was no need to devise new systems from scratch: When Nixon proclaimed drugs “public enemy No. 1,” or declared “war against the criminal elements which increasingly threaten our cities, our homes, and our lives,” he didn’t need to name the threat. A centuries-long legacy of equating blacks with criminals and moral degenerates did the work for him.

In 1996, William J. Bennett, John P. Walters, and John J. DiIulio Jr. partnered to publish perhaps the most infamous tract of the tough-on-crime era, Body Count: Moral Poverty … and How to Win America’s War Against Crime and Drugs. The authors (wrongly) predicted a new crime wave driven by “inner-city children” who were growing up “almost completely unmoralized and develop[ing] character traits” that would “lead them into a life of illiteracy, illicit drugs, and violent crimes.” The threat to America from what the authors called “super-predators” was existential. “As high as America’s body count is today, a rising tide of youth crime and violence is about to lift it even higher,” the authors warned. “A new generation of street criminals is upon us—the youngest, biggest, and baddest generation any society has ever known.” Incarceration was “a solution,” DiIulio wrote in The New York Times, “and a highly cost-effective one.” The country agreed. For the next decade, incarceration rates shot up even further. The justification for resorting to incarceration was the same in 1996 as it was in 1896.

That’s just a taste of what Coates has to offer on this topic. But perhaps that last sentence sums it up pretty well.

At the end of his article, Coates talks about the fact that success in ending mass incarceration will be more complex than most politicians are talking about these days. One of the big reasons for that is this centuries-long mythology of equating black with criminal.