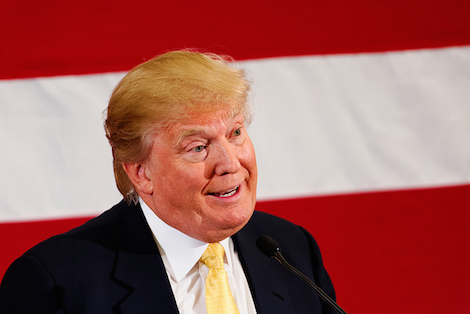 I knew I remembered this story about Trump University being a giant scam. Let me see, where did I see that?

Oh, yes, I saw it at the Washington Montlhly two freaking years ago when no one thought Donald Trump was a serious person and so no one much cared. The inspiration for that article was a piece by Steven Perlberg at Business Insider which detailed why the New York Education Department forced Trump to stop calling his “school” a “university,” and also why Trump was getting sued by New York Attorney General Eric Schneiderman:

The suit says that 5,000 students, many paying thousands of dollars, thought they would get to at least meet the Donald. Instead, they only got their picture taken with a cardboard cutout.

Between 2005 and 2011, Trump University swindled consumers into paying for a spate of expensive courses that did not deliver on promises to teach real estate investing techniques, the suit alleges.

“More than 5,000 people across the country who paid Donald Trump $40 million to teach them his hard sell tactics got a hard lesson in bait-and-switch,” Schneiderman said in a statement. “Mr. Trump used his celebrity status and personally appeared in commercials making false promises to convince people to spend tens of thousands of dollars they couldn’t afford for lessons they never got.”

Schneiderman argues that Trump promised free workshops taught by his own knowledgeable, hand-picked instructors who were, in fact, nothing of the sort.

The free workshops were actually designed to get students to sign up for another three-day, $1,495 seminar where Trump would supposedly appear in person, the suit alleges.

Trump’s excuse will sound familiar to you now that you’ve seen this charlatan in action in the presidential race:

Trump’s attorney Michael Cohen denied the charges, arguing they were purely political. “The attorney general has been angry because he felt that Mr. Trump and his various companies should have done much more for him in terms of fundraising,” Cohen said.

Works for anyone, virtually, but not for the people who had to take a photo next to a cardboard cutout of their hero.