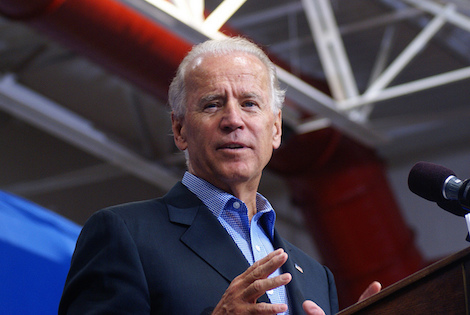 Here’s a tidbit from NBC’s First Read this morning about Joe Biden:

[I]n yet another example of how the reporting is in one place and Biden’s words are in another, here is what he told the Catholic organization America Media in an interview: “We’re just not – it’s not quite there yet and it may not get there in time to make it feasible to be able to run and succeed because there are certain windows that will close,” he said. “But if that’s it, that’s it. But it’s not like I could rush it.”

I’d guess the more Biden’s words undermine them, the more the various people fanning the Biden ’16 flames for their various reasons will kick out the jams to suggest he’s just having some pre-game jitters before putting a massive machine into motion. And in fact, there’s a great example today from the best-selling fantasist and Hillary-hater Edward Klein:

The talk in Democratic Party circles is that Barack Obama has told Joe Biden that he is prepared to endorse him for president if, in return, Biden promises to let Obama have a final say in the choice of his vice presidential running mate.

According to these Democratic sources, Biden is mulling over the president’s conditional offer of support.

In addition, there is speculation among top Democratic sources that Obama has another quid pro quo for his endorsement: he wants Biden to choose an African American as his vice presidential running mate.

In this scenario, which Obama has not yet fully explained to Biden, Biden would promise to serve only one term in the White House, after which he would back his vice president to succeed him.

As Biden’s vice president, Obama is said to favor former Massachusetts Governor Deval Patrick, a close Obama ally who is the first and only African American to have served as governor of the Bay State.

Interesting that nobody else is hearing this specific “talk in Democratic circles.” But it’s a good example of how Biden has become the vehicle for all sorts of strange causes, from a backdoor 2020 nomination of Elizabeth Warren to this weird fantasy of a race-obsessed Obama scheming to get rid of HRC. If and when Joe Biden announces he is not running for president, and likely in the next breath endorses Clinton, there will a run on crow in Beltway markets, although those most in the wrong will probably move right on to the next fantasy.