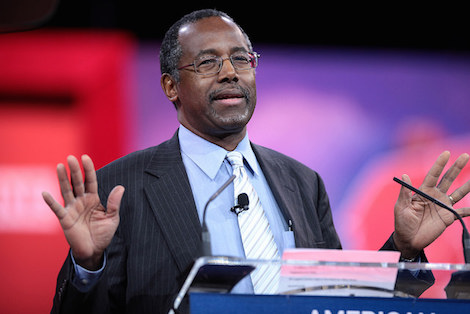 At The Week, Paul Waldman becomes semi-enraged at Dr. Ben Carson’s casually ignorant comments about evolution, the Big Bang and Muslims, and wonders how anyone with medical training can be that way:

[W]hat’s so odd about Carson is that science is the very thing he was trained in, and the thing at which he excelled. Yet his religious beliefs are apparently so powerful that they completely overwhelm his ability to look objectively at any scientific area that might give some answers to what people once thought were purely metaphysical questions.

Training in science is also training in how to think — what sorts of questions can be answered in what sorts of ways, and how you know what you know and what you don’t. That’s why it’s nearly as surprising to hear Carson offer as justification for his belief that no Muslim should be president, “Taqiyya is a component of Shia that allows, and even encourages you to lie to achieve your goals,” as it is to hear him dismiss the Big Bang with a line about entropy. It isn’t surprising that Ben Carson knows next to nothing about Islam; what is surprising is that, despite a career immersed in a very specialized field, he would think that he could listen to a couple of Glenn Beck rants and come to a deep understanding of a 1,400-year-old religion.

That’s a very good point. But perhaps because I hail from a part of the country where people with medical training don’t really stand out from anyone else in their religious views, I don’t tend to see them as missionaries from science. Indeed, the first time I heard about Ben Carson suggesting the “adversary” (code for Satan) inspired the theory of evolution and the Big Bang, I though of this man from my home state of Georgia:

Limited scientific knowledge is apparently compatible with all sorts of strange beliefs. Way back in the day, it was very common in visits to dentists’ office to encounter literature from the John Birch Society. I think it may have had something to do with opposition to fluoridated water.

In Carson’s case, there’s probably an organic connection between his fundamentalist religious tendencies and the fact that he undertook medical training to begin with. He’s a Seventh Day Adventist, and as anyone knows who has been treated in one of that denomination’s many hospitals and clinics, they are very focused on health care.

So it can all get complicated, but I certainly don’t plan to consult any of my wonderful physicians on matters of religion or politics, and trust they would not have the temerity to run for president.