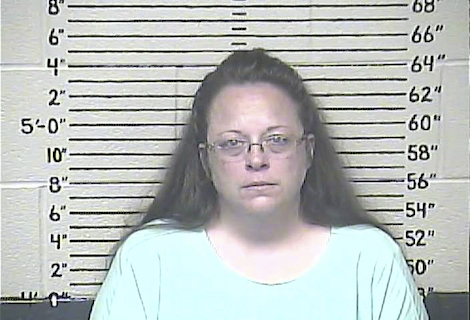 I don’t know exactly what Pope Francis is going to say (or in a few minutes, may have already said) about “religious liberty” to Congress this morning. But it’s important to recognize that this familiar concept is in danger of being debased into meaninglessness or even a backlash by Christian Right claims that far exceed the longstanding legal doctrines justifying reasonable accommodation of religious conscience. At Ten Miles Square today, Indiana University law professor Steven Sanders provides some crucial context for the Kim Davis case. Here’s an excerpt:

To listen to her legal team, you might think Kim Davis was the first person ever to experience a conflict between religion and her responsibilities as a citizen, employee, or public official. In fact, at both the federal and state levels, there is a well-developed body of law concerning religious accommodations in the workplace.

American law is highly individualistic when it comes to the definition of religious beliefs. This means that if Kim Davis says allowing a gay couple to receive a form with her name machine-printed on it somehow inhibits her own personal exercise of religion, and that she believes citizens elected her to arbitrate whose marriages are valid in the eyes of God, a court will probably accept such assertions with a straight face. But accommodations made on behalf of a believer must be objectively reasonable. Beliefs may be grandiose, but accommodations may not unduly burden other people.

Even under so-called “religious freedom restoration acts,” a government’s compelling interest in maintaining efficient public services and complying with Supreme Court law on marriage equality weigh against claims like Davis’s. As a federal appeals court observed this year in a case under the federal RFRA, “The very word ‘accommodation’ implies a balance of competing interests”….

Such legal balancing tests don’t work when one side believes it is the center of the universe and everyone else’s rights must give way. As “accommodation” for her beliefs, Davis thought that gay couples should be forced to drive to another county for their marriage licenses, or that the governor should convene a special session of the legislature to change state marriage procedures. Even when her name was removed, Davis’s lawyers were blowing smoke that the marriage forms were invalid. To anyone who knows something about religious-freedom law, it was predictable that the federal courts would respond to all this by saying, in effect, “Get back to us when you have something serious to offer.”

The conservative drive to carve out whole areas of discrimination law that can be ignored by anyone claiming a religious objection is backfiring, and could do damage to more serious religious liberty claims:

The Christian right hasn’t learned from its experience with the state Religious Freedom Restoration Act in Indiana last spring. Although RFRAs can be used to challenge virtually any law that is alleged to substantially burden someone’s religious exercise, the politics made clear that the only thing most Christian-right activists cared about was winning exemptions from civil rights laws that protected gays against discrimination. Legislators and business leaders became so concerned that the RFRA would tar Indiana with a reputation for anti-gay bigotry that they rushed through an amendment so that now, the one scenario where a religious accommodation is not available to a private business is in defense to any charge of illegal discrimination.

Never did the Shakespearean metaphor “hoist by his own petard” – to be destroyed by one’s own scheme intended to harm another – seem so appropriate.

But as Sanders notes, part of the price the rest of us will pay for this homophobic legal circus act is “a distorted understanding of religious freedom, deeper confusion about the Constitution, and a more-impoverished understanding of our rights and responsibilities as members of a pluralistic society.”