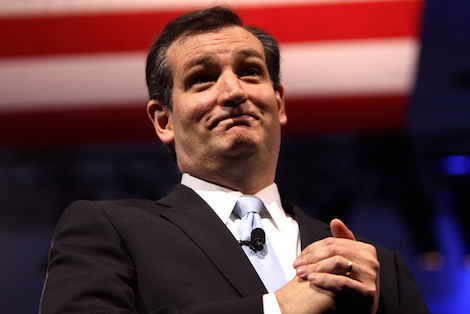 Continuing on in shutdown mode, Sen. Ted Cruz is going to push the defunding of Planned Parenthood so hard that we’ll think he’s Salt-N-Pepa. He’s riling up the worst of the House Republicans, just as he did in 2013.

If you need some talking points for your deranged uncle to rebut Cruz’s nonsense, you can get them from actual Republicans:

Moderate House Republicans are pushing back against the conservative Texas senator, fearing a reprise of 2013.

Eleven House freshmen, including members of the centrist Main Street Partnership, wrote a letter to colleagues Tuesday warning them to “avoid repeating the mistakes of the past.”

“The sixteen-day government shutdown in 2013 cost our economy an estimated $24 billion and stalled the creation of over 100,000 private sector jobs,” they wrote.

Yet, as I’ve discussed quite often recently, we’ve passed the point of return with the Republican base and Cruz and his fellow travelers are unfortunately, actually correct about the following:

Cruz’s allies, however, argue that GOP leaders need to pay more attention to the party’s sinking popularity among its own base — which could be revived with a high-stakes battle over Planned Parenthood funding.

Survey data released by the Pew Research Center over the summer showed that positive views of the GOP among Republicans declined by an astonishing 18 percentage points since January.

Overall, the party’s favorability rating dropped by 9 points since it took over the Senate in January, according to the Pew poll, published in July.

Generally speaking, I think Republican efforts to boost enthusiasm among their base at the expense of attracting the middle are a fool’s game played by Movement Conservatives who don’t give a damn about real strategy or evidence. But you can’t have your base is open revolt, and that’s what they have now.

“If you juxtapose these numbers with the period before and after the 2013 shutdown, our numbers are now much worse,” said a Senate Republican aide. “The only thing we can see now is people are not happy with what we’re doing. Whatever we’re doing is not working. For all intents and purposes, we’re on a sinking ship.”