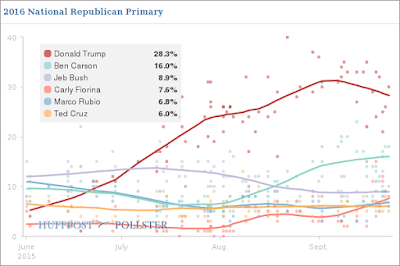 Unless you are one of the people who thinks that Republicans are headed for a brokered convention (not out of the realm of possibilities), then we have to assume that at some point during the primaries, they’ll settle on a candidate. But I’ll take things one step farther than Ed Kilgore. The idea of “normalcy” eventually settling in to this campaign is a pipe dream.

By now, most of us have heard enough about the unhinged rantings of candidates like Trump and Carson. When it comes to Fiorina, a lot has been written about the lies she told in the last debate. Much less noted is the fact that she said she wouldn’t even talk to Vladimir Putin…not a very “Reaganesque” kind of thing to say, is it?

Sticking with the theme of foreign policy, you have Marco Rubio who actually said that the world “has never been more dangerous than it is today.” I’ll let Jonathan Chait take it from there:

To be sure, Rubio’s claim that the world “has never been more dangerous than it is today” is not just wrong but insanely wrong. How about when a massive communist empire threatened us with nuclear annihilation? Or when Nazi Germany and Imperial Japan launched a war of extermination? Or when the Mongols amassed the largest land conquest in human history and left behind smoking ruins and pyramids of skulls?

As Stephen Pinker has argued, the world has in fact grown comprehensively safer in nearly every respect. This is true whether safety is defined in humanitarian or geopolitical terms.

Ahhh…but how about that other “serious” candidate, Jeb Bush? Yes, the one who’s most recent faux pax (in a very long list so far) was to embrace a new campaign theme about how his brother “kept us safe.” Josh Marshall’s reaction to that one was: “Put a Fork in Him.”

It’s not simply that George W. Bush’s tenure is still quite unpopular with the country at large, though feelings have softened toward the man himself. It’s that quite obviously not being his own man makes Jeb look weak and silly, quite apart from being identified with policies that at least the general electorate remains broadly opposed to.

And when it comes to John Kasich – get back to me about him when he’s averaging more than 3-4% in the polls. I also don’t think that any candidate in the last debate was more incoherent than Kasich. So it’s not looking good for him right now.

Of course, a lot of this pinning for “normalcy” hinges on the mythology that in 2012 Republicans rejected the candidacies of people like Herman Cain and Rick Perry to settle on the “serious” one in that group…Mitt Romney. That completely ignores – as Steve Benen chronicled so assiduously – “Mitt’s Mendacity.” Or perhaps people are thinking about 2008 when they chose the “serious” John McCain – with his running mate Sarah Palin.

The fact is that Republicans on the national level rejected “normalcy” after the presidency of George W. Bush left us mired in two wars in the Middle East with mounting debt and the Great Recession. The three pillars of GOP orthodoxy – military interventionism, tax cuts and deregulation – had been demonstrated to be total failures.

At that point, they could have chosen to rethink their orthodoxy. Instead Republicans decided to fuel an insurgency against the Democratic President in order to mount a campaign of total obstruction. Since then, their presidential campaigns have become “post-policy” and are focused mostly on railing about the opposition in order to fear-monger. We’re not likely to see a return to normalcy until they come up with another option.