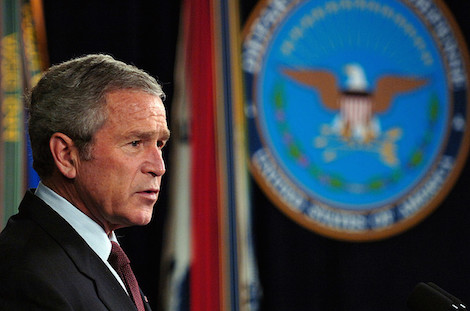 At the always ahead of the times, always racially enlightened National Review, Andrew McCarthy takes issue with Charles Krauthammer’s criticisms and defends Ben Carson’s Islamophobia. McCarthy makes an extended, if sometimes circuitous, argument, but his conclusion isn’t the better for it.

Like naturalized citizens, Muslims can be extraordinary Americans. But until Islam is reformed in such a way that a pluralistic, pro-liberty Islam is the world’s dominant Islam — and Islamic supremacism is the marginal exception, not the all-too-familiar rule — it is perfectly reasonable for Ben Carson, and any other American, to oppose the idea of a Muslim president of the United States.

Fortunately, we have a recent example of a presidential candidate who adhered to the teachings of a minority religion. And Mitt Romney wasn’t just some run-of-the-mill Mormon.

In 1977, he became a counselor to the president of the Boston Stake. He served as bishop of the ward (ecclesiastical and administrative head of his congregation) at Belmont, Massachusetts, from 1981 to 1986. As such, in addition to home teaching, he also formulated Sunday services and classes using LDS scriptures to guide the congregation. After the destruction of the Belmont meetinghouse by a fire of suspicious origins in 1984, he forged links with other religious institutions, allowing the congregation to rotate its meetings to other houses of worship during the reconstruction of their building.

From 1986 to 1994, Romney presided over the Boston Stake, which included more than a dozen wards in eastern Massachusetts with almost 4,000 church members altogether.

Now, I’m neither a Mormon nor a Catholic, so please forgive me any errors here, but my understanding is that a Mormon stake is the rough equivalent of a Catholic deanery, and a deanery is provided for in (lord help us) the Code of Canon Law. In his leadership positions, Mitt Romney advised people on how to avoid running afoul of the faith’s religious rules and regulations. In addition to the aforementioned fact that, as the Bishop of Belmont, Romney “formulated Sunday services and classes using LDS scriptures to guide the congregation,” as Stake leader, “he counseled women to not have abortions except in the rare cases allowed by LDS doctrine, and encouraged single women facing unplanned pregnancies to give up their baby for adoption.”

I mention this not by way of criticism of the man, but only to question how McCarthy would feel about a Muslim who was basically in charge of the religious instruction and enforcement for all Muslims in the Boston area. I imagine that he’d think such a person was someone whom who’d have “potentially divided loyalties.”

Now, considering how much suspicion has been cast on the current president on account of his absent father’s (lapsed) Islamic faith, I can only wonder what McCarthy might think about some of Mitt Romney’s direct ancestors. For example, his great-grandfather Miles Park Romney who was so dedicated to polygamy that he moved his family to Mexico to avoid arrest. And lest we think that’s the extent of the connection, consider the full name of the 1890 Supreme Court ruling that upheld the law against Mormon polygamy: LATE CORPORATION OF THE CHURCH OF JESUS CHRIST OF LATTER-DAY SAINTS et al. v. UNITED STATES. ROMNEY et al. v. SAME..

Is there anything about Mormon religious law or the hierarchy of the Church of Latter-Day Saints that is inconsistent with taking an oath to preserve and protect the Constitution? I doubt it, but it’s at least potentially a problem, right? I mean, it’s an insular leadership team and they don’t advertise how they go about their internal deliberations. What would Boston Stake leader Mitt Romney do if he got instructions from Salt Lake City? Ignore them? Use his own independent judgment?

Did that change when he became the governor of Massachusetts? Would it have changed if he had become the president?

We can ask all the same questions of any religious person, and the more hierarchical their church, the more credibility those questions will have. At the time this country was formed, several of our states were pretty well controlled by a single religious denomination and its religious leaders. The Anglicans of Virginia were less concerned about shutting Muslims out of government than being shut out of government themselves by the Congregationalist leaders in the Bay State. For good reason, the Baptists of the Carolinas were suspicious of the Quakers of Pennsylvania, and vice-versa, not to mention the Catholics of Maryland.

For these people, the oath of office was important because it was an assurance that the federal government was open to their sect. The impossibility of excluding people from other sects was the price they paid to assure their own rights.

The people of Massachusetts may not have been free of worry about the potentially divided loyalties of Anglican presidents from Virginia, and the people of Virginia may have harbored concerns about the fealty of John Adams. In any case, these folks were already heretics in their own style, who were well on their way into Enlightened thinking.

I say all this because it’s instructive to look at McCarthy’s case against Muslims to find ways in which what he says about them is not equally true of other sects and religions.

If you want to say that you’re not comfortable with being led by people of certain faiths, that’s kind of natural. I had qualms about George W. Bush’s faith, for example, and how it affected his decision making. But the oath is there to calm those concerns.

Krauthammer made a good point when he said that the Constitution is didactic in the sense that it not only tells what we must not do but we ought not do. It precludes us from prohibiting a Muslim from becoming our president but it also instructs us that we shouldn’t want to do such a thing.

McCarthy obviously disagrees, but his argument that the Constitution is not a pedagogical tool is weak. He insists, for example, that it teaches us the virtues of limited government. That’s true, as far is it goes, but it also teaches us the necessity of religious tolerance.