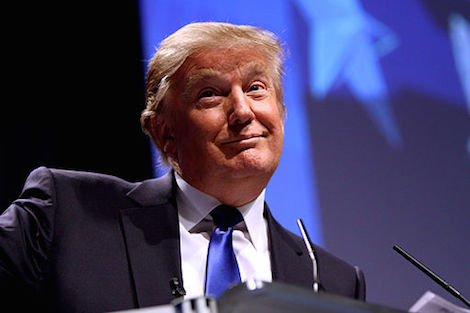 So Donald Trump’s much-ballyhooed tax plan is sorta kinda out today, if you are satisfied with sorta kinda descriptions which leave a lot of the details out. But Jonathan Chait doesn’t have to see any more to get the basic idea:

Donald Trump has spent weeks talking like a populist, promising to make the rich pay their fair share and attacking his opponents as puppets of the party’s wealthy donor base. Some of us concluded Trump was running to the left of the Establishment on taxes. Now Trump has released his “plan” to “reform” taxes, and it’s clear this conclusion was totally wrong.

Trump’s proposal is extremely similar to all the other Republican plans. He would cut the top tax rate to 25 percent, even lower than the 28 percent rate proposed by Jeb Bush. While Trump would not eliminate taxes on investment income, as Marco Rubio proposes, he likewise plans to eliminate the estate tax, which currently applies only to inheritances over $10 million.* Trump says he will pay for all this by eliminating “loopholes,” but fails to identify these loopholes. Even if he cleaned out every deduction in the tax code, there is not enough revenue to make up for the enormous tax cuts he would supply to the rich.

From interviews it sounds like Trump is expecting a lot of supply-side magic-asterisk action to pay for his tax-cut largesse. And I also wonder if Trump’s proposal to take working po’ folks off the tax rolls altogether also means they lose the refundable tax credits so many need to stay within shouting distance of the poverty line.

But personally, even if parts of the plan were clearer and made more sense, I cannot look past the fundamentally immoral–and in Trump’s case, self-serving–elimination of federal inheritance taxes. I guess this does make Trump more of an orthodox Republican despite the “populist” talk, since GOP tax policy is all about bait-and-switch.