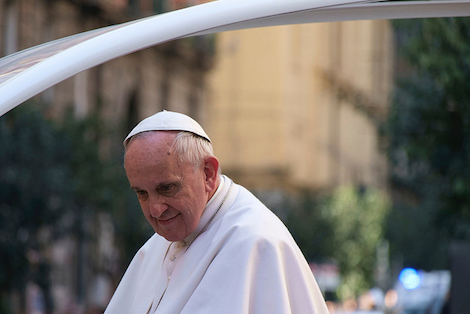 After a generally very successful visit to the United States, Pope Francis dropped this little love bomb during an interview as he jetted back to Rome, per Reuters:

Although the Argentine-born pontiff delved into some of the United States’ thorniest political debates during his visit, he never specifically referred to a controversy over same-sex marriages, which the Church firmly opposes.

On the flight back to Rome, he was asked if he supported individuals, including government officials, who refuse to abide by some laws, such as issuing marriage licenses to gays.

“Conscientious objection must enter into every juridical structure because it is a right,” Francis said….

“And if someone does not allow others to be a conscientious objector, he denies a right,” he added.

Francis said conscientious objection had to be respected in legal structures. “Otherwise we would end up in a situation where we select what is a right, saying: ‘This right has merit, this one does not.'”

Sounds a lot like what Kim Davis is doing, actually.

Like Davis and her American defenders, the Pope is conflating passive resistance to laws thought to violate the conscience with active, aggressive efforts by a public official to deny legally established rights to others. I don’t know a single person who wants to deny Davis the right to think or say whatever the hell she wants about same-sex marriage or anything else, even though her view of my Lord and Savior Jesus Christ as a bigot offends my own and many others’ religious sensibilities. It’s her effort to arrogate public policy to her POV that got her into the slammer–a destination she and her lawyers and political advisers craved like chocolate cake.

I don’t know if the Pope’s comments about Davis were a casual aside or a parting gift to those Bishops who want to make the shield of “religious liberty” a sword to use against gay people and against women who seek to exercise reproductive rights. But we’ll hear a lot about it from American conservatives who otherwise wish Francis had just stayed home.