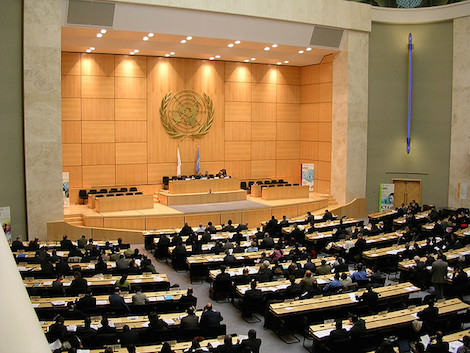 Edward-Isaac Dovere at Politico captured what most people heard in President Obama’s speech on Monday to the United Nation’s General Assembly.

President Barack Obama took repeated swipes at Vladimir Putin, Dick Cheney and even Donald Trump, without mentioning them by name, in an address to the United Nations on Monday, holding them up as examples of forces playing off fears and attempting to pull the country and world backward.

That is an accurate summary. But it captures the trees and not the forest. In many ways, the President’s speech was an affirmation of an Obama Doctrine. He pointed out the failure of domination as a model for conducting both domestic and foreign affairs.

There are those who argue that the ideals enshrined in the U.N. charter are unachievable or out of date — a legacy of a postwar era not suited to our own. Effectively, they argue for a return to the rules that applied for most of human history and that pre-date this institution: the belief that power is a zero-sum game; that might makes right; that strong states must impose their will on weaker ones; that the rights of individuals don’t matter; and that in a time of rapid change, order must be imposed by force.

Because of the interconnectivity of our world today, we have to work together in order to succeed.

But I stand before you today believing in my core that we, the nations of the world, cannot return to the old ways of conflict and coercion. We cannot look backwards. We live in an integrated world — one in which we all have a stake in each other’s success. We cannot turn those forces of integration. No nation in this Assembly can insulate itself from the threat of terrorism, or the risk of financial contagion; the flow of migrants, or the danger of a warming planet. The disorder we see is not driven solely by competition between nations or any single ideology. And if we cannot work together more effectively, we will all suffer the consequences. That is true for the United States, as well.

That echoes what he said in his first foreign policy speech in Cairo back in 2009.

For we have learned from recent experience that when a financial system weakens in one country, prosperity is hurt everywhere. When a new flu infects one human being, all are at risk. When one nation pursues a nuclear weapon, the risk of nuclear attack rises for all nations. When violent extremists operate in one stretch of mountains, people are endangered across an ocean. When innocents in Bosnia and Darfur are slaughtered, that is a stain on our collective conscience. That is what it means to share this world in the 21st century. That is the responsibility we have to one another as human beings.

And this is a difficult responsibility to embrace. For human history has often been a record of nations and tribes — and, yes, religions — subjugating one another in pursuit of their own interests. Yet in this new age, such attitudes are self-defeating. Given our interdependence, any world order that elevates one nation or group of people over another will inevitably fail. So whatever we think of the past, we must not be prisoners to it. Our problems must be dealt with through partnership; our progress must be shared.

Finally, he defined the real source of strength.

Our systems are premised on the notion that absolute power will corrupt, but that people — ordinary people — are fundamentally good; that they value family and friendship, faith and the dignity of hard work; and that with appropriate checks and balances, governments can reflect this goodness.

I believe that’s the future we must seek together. To believe in the dignity of every individual, to believe we can bridge our differences, and choose cooperation over conflict — that is not weakness, that is strength. It is a practical necessity in this interconnected world.

The notion that ordinary people are fundamentally good is something we’ve heard often from this President. It reminds me of what Ta-Nehisi Coates wrote a few days after Obama was first elected in 2008.

I have to admit that there are times that I still “suck my teeth” when I hear things like that. But I think Coates is right…that’s my cowardice talking.