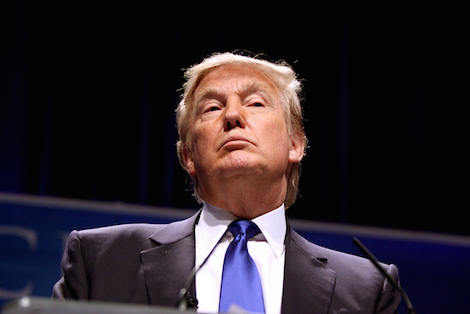 If you get bored this week, there’s a sure-fire entertainment available at the New York Times Magazine: Mark Lwibovich’s characteristically tangled take on Donald Trump. Leibovich, as you may know, is fond of mocking the very political media conventions he and his employers sometimes exemplify. And it’s obvious he’s alternatively fascinated and horrified by extended direct exposure to The Donald. Here’s my favorite passage:

It was early September when we met for the first time in his 26th-floor office in Trump Tower. When I walked in, Trump had the legendary college basketball coach Bobby Knight paying homage to him over speakerÂ­phone. Knight, who had never met Trump, apparently called him out of the blue to offer his support. I was slightly dubious about how ‘‘out of the blue’’ this really was, given how perfectly it was timed to my arrival, but Knight delivered a stirring tribute regardless. ‘‘No one has accomplished more than Mr. Trump has,’’ Knight raved after Trump informed him that a reporter was in the room. Trump nodded and motioned to the Â­phone and made sure I had my recorder running. ‘‘What a great honor, man,’’ Trump said. ‘‘I will talk to you soon, and I won’t forget that you called. Thanks, Bobby.’’

You read this and realize that Bobby Knight is precisely the kind of person you’d expect to be in Trump’s corner: someone whose dedication to winning has made him a parody of himself and an unsettling example of the pathology of a competitive culture.

Then there is this theory about Trump’s appeal to people who are not necessarily very successful:

A curious feature of the mob scene that has surrounded Trump at most public events since August is that people keep handing him money to sign. I first witnessed this on Sept. 11, a day of national mourning. Trump was working his way through the lobby of Rockefeller Center after taping an appearance on ‘‘The Tonight Show Starring Jimmy Fallon,’’ and a boisterous crowd had been waiting for him. One building security guard described the commotion to me as ‘‘Justin Bieber level.’’ It consisted heavily of tourists and foreign visitors, many of them young. There were the usual paparazzi, and some shouted questions. But what struck me about this Trumpus Ruckus were the dollar bills. Trump signed one after another, and the recipients clutched and cherished them like winning lottery tickets. ‘‘Look, a hundred-Â­dollar bill?’’ Trump said, showing me a C-note that a woman from Long Island had handed him to sign. You don’t often see politicians signing money. If asked, some will refuse — I’ve seen Hillary Clinton do this — possibly because it is technically illegal to deface currency. But it is a fitting souvenir from one of the high priests of the nation’s secular religion: aspirational consumerism. Reagan was a capitalist and a free-Â­market icon, but conspicuous consumption (as people used to call it) was a benefit of American freedom and prosperity, not a national objective or a virtue in itself. Not so much with Trump, who of course owns many beautiful, classy things. There is a certain prosperity-Â­theology aspect to Trump’s appeal, the idea that you follow a minister because he is rich and has his own plane and implicitly and sometimes explicitly promises that you, too, will be rich.

For what it’s worth, Leibovich thinks Trump is in the presidential race for good, and is actually battening on the fear and rage of political and media elites towards him. Like a lot of us pointy-headed observers, it’s taking him some time to internalize how familiar and even revered Trump is among people who have been watching him on television and in the supermarket check-out line for decades. He’s a regular part of their lives who has suddenly leapt into the political arena and a moment of maximum popular displeasure with government and political elites, and of course he’s doing well. But here’s the kicker: there’s no guaranteed sell-by date for what Trump is dispensing. Maybe actual voters will sober up before the Iowa Caucuses, and maybe his act won’t wear on them that well, and maybe he’ll finally say or do something that shocks the conscience of people who currently seem to hate “political correctness” more than any actual sin. But he’s not going to get bored and go away, no matter how much we wish for it.

UPDATE: Turns out Sarah Posner anticipated Leibovich’s vision of Trump as a prosperity minister by an entire cycle, when he was (briefly) scheduled to moderate a GOP presidential debate:

Donald Trump, it seems, is the GOP’s televangelist for 2012. In the past, Republican presidential hopefuls have kissed the rings of the nation’s most high-profile televangelists, groveling for votes from their television studios to their megachurches, the fruits of their insidious demands for their congregants’ money with a promise that God will make them rich in return. Trump, like the televangelists, is a publicity hog with an empathy problem: I’m rich, and you could be too if you weren’t such a loser (or, in the case of the televangelists, a non-believer).

Trump, of course, believes only in himself as a deity; the televangelists, while loudly proclaiming their faith in the divine, really consider themselves to be God’s anointed ones too. Don’t question them—their authority to demand your obedience, their authority to demand you turn give them your money—or you will hear this bit of scripture: “Touch not mine anointed ones, and do my prophets no harm.” (Psalm 105:15).