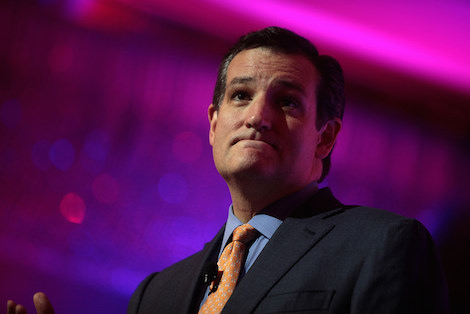 I’ve seen a lot of smart people predicting that this September/October window we’re in is going to be the time for Sen. Ted Cruz to shine as a presidential candidate. With all this really unpopular (with the Republican base) must-pass legislation to wade through, the Republican leadership in Congress is going to be taking it on the chin over and over. Even the prospect of dealing with the rage prompted John Boehner to announce that he’ll resign when all the dirty work is over.

The idea is that Sen. Cruz will loudly protest at every juncture, accusing his own party of being gutless appeasers who talk a good game but are ultimately bent on giving President Obama everything he wants.

So, yeah, it’s not like knowledgeable people couldn’t see this coming. It’s not even surprising, at this point, that Cruz is being treated with a virtually unprecedented lack of deference and respect by his Senate colleagues, including every member of his own party not named Sen. Mike Lee of Utah.

For the second time, Cruz has been denied a sufficient second to call up a roll call vote. The first time it happened, back in late July, I wrote a piece explaining the procedural significance of this. I refer you to that if you are the kind of geek that needs to understand how the Senate actually operates.

The big picture is that, in July, Cruz’s colleagues were angry that he had called Mitch McConnell a liar on the Senate floor which is an actual violation of the Senate rules. This time, however, there was no comparable provocation for retaliation. This time, the Senate Republicans were just tired of his showboating and grandstanding, and they didn’t want to give Cruz a vote that he would turn around and use to criticize them.

Last time, senators lined up to tell reporters why they had slapped Cruz down. This time, it seems more like routine business.

So, in his little time in the Senate, Cruz has managed to alienate himself from his colleagues in a way that I’ve never seen before. There have been similar senators in the past, I guess, but I can’t think of any since Joe McCarthy who can even begin to compare to how the Senate feels about Cruz. And I don’t think McCarthy suffered the same kind of rebukes from his colleagues until he’d been in the Senate for about seven years and was finally censured.

Without any perceptible support outside of his buddy Sen. Lee, Cruz has to try harder to make his conflict with the Senate leadership visible to the base. But it’s really Cruz against the world.

He can get himself on the radio, for example, but we won’t find any sympathetic television coverage. He might be able to have a good moment in a future debate, but that’s not worth much.

It’s not going to be easy for him to reach his potential fans.

He’s also got the worst electability argument of any candidate I’ve ever seen, as even his own colleagues who know him best would never want to serve under his leadership.

I don’t see this Cruz bubble forming. He may see a blip simply because he’s being noisy, but he’s actually more convincing in his role as Donald Trump’s caddie.