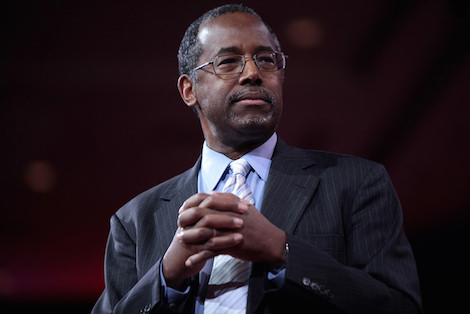 Perhaps the least surprising revelation of the presidential cycle so far can be found in David Corn’s piece today on Dr. Ben Carson’s enthusiasm for the famous Bircher crank W. Cleon Skousen, best known as a formative shaper of the world-view of Glenn Beck.

Carson swears by Skousen, who died in 2006. In a July 2014 interview, Carson contended that Marxist forces had been using liberals and the mainstream media to undermine the United States. His source: Skousen. “There is a book called The Naked Communist,” he said. “It was written in 1958. Cleon Skousen lays out the whole agenda, including the importance of getting people into important positions in the mainstream media so they can help drive the agenda. Well, that’s what’s going on now.” Four months later, while being interviewed by Megyn Kelly on Fox News, Carson denounced unnamed Marxists who were presently seeking to destroy American society: “There was a guy who was a former CIA agent by the name of Cleon Skousen who wrote a book in 1958 called The Naked Communist, and it laid out the whole agenda. You would think by reading it that it was written last year—showing what they’re trying to do to American families, what they’re trying to do to our Judeo-Christian faith, what they’re doing to morality.” (Skousen had been an FBI employee—not a CIA officer—and mainly engaged in administrative and clerical duties; later he was a professor at Brigham Young University and police chief of Salt Lake City.) And the most recent edition of this Skousen book boasts Carson’s endorsement on the front cover: “The Naked Communist lays out the whole progressive plan. It is unbelievable how fast it has been achieved.”

This just scratches the surface of Skousen’s dark fantasies about liberalism–which he invariably referred to in a special conspiracy theory code as “progressivism,” the term invariably used by Beck and Carson to describe the evil anti-American plot that has been gnawing away at the country’s vitals at least since Woodrow Wilson. In 2007, after Mitt Romney referred positively to fellow-Morman Skousen in an interview, conservative journalist Mark Hemingway penned a long piece for National Review warning conservatives away from Skousen’s influence:

Skousen’s Communist paranoia may have reached it’s apotheosis in 1970 when the Mormon church and BYU in particular began receiving a tremendous amount of external pressure to change the church’s policy on denying the Mormon priesthood to blacks. Skousen, then a professor at BYU, published an article entitled “The Communist Attack on the Mormons” and noted that critics were employing Communist tactics which were “distorting the religious tenet of the Church regarding the Negro and blowing it up to ridiculous proportions.” The Mormon Church reversed course on its discriminatory practices in 1978 and began ordaining black men to the priesthood.

Later in the 70s, Skousen accused the Council on Foreign Relations and the Rockefellers of puppeteering the election of Jimmy Carter to pave the way for One World Government, his new favorite topic. Things got so bad that the Mormon Church eventually issued an official communiquÃ© distancing itself from Skousen’s organization, the Freemen Institute.

Hemingway’s warnings got a lot more attention when Skousen’s influence started becoming evident in the Tea Party Movement. Here’s what I wrote at the Democratic Strategist back in 2009:

Thanks to Beck, one of Skousen’s books, The 5,000 Year Leap, has become a runaway bestseller, which suggests that a lot of Tea Party folk have read it and given it to friends and family. Next time someone tells you the Tea Party movement is composed of average Americans who are simply worried at the terrible things Barack Obama’s trying to do to their country, keep in mind they are being influenced by the works of someone who thought America was being plunged into socialist tyranny by the Eisenhower administration.

So when Carson was praising Skousen in 2014, he had every reason to know the guy was, as Hemingway put it, “an all-around nutjob.”

All those pundits left and right who have helped Carson build a reputation for being this benign and apolitical figure who just wants a return to common sense really, really need to read Corn’s piece and start paying closer attention to the dog-whistles in the man’s utterances. And Carson needs to be asked directly whether he thinks Ike was a Communist or at least a fellow traveler.