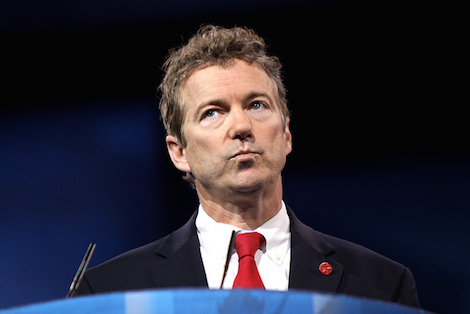 No one is paying much attention to the Republican candidates that didn’t make it to the main stage in the last debate (Santorum, Pataki, Jindal, Graham and Gilmore). If any of them were to drop out of the race at this point, it wouldn’t produce many headlines. Of the remaining ten, it is looking more and more like the next one to go could very well be Sen. Rand Paul.

There have been a couple of stories lately that might signal a move sometime soon. First of all, one of Paul’s SuperPacs has quit raising money for him.

In a Tuesday telephone interview, Ed Crane, who oversees the group, PurplePAC, accused Paul of abandoning his libertarian views — and suggested it was a primary reason the Kentucky senator had plummeted in the polls.

“I have stopped raising money for him until I see the campaign correct its problems,” said Crane, who co-founded the Cato Institute think tank and serves as its president emeritus. “I wasn’t going to raise money to spend on a futile crusade.”

“I don’t see the point in it right now,” he added.

Futile crusade? Ouch! When it comes to the polls he’s referring to, Paul was at about 9% at the beginning of the summer according to Huffington Post’s aggregator. And today he’s coming in under 3%.

The other story has to do with the fact that – as Steve Benen notes – Paul is the only one of the 20 presidential candidates (15 Republicans and 5 Democrats) who is also running for re-election to his current Senate seat. Jonathan Easly reported that this week Paul will take a break from the presidential race to do some fundraising for his Senate campaign.

Of course Paul’s supporters were quick to point out that this doesn’t mean he is giving up on his presidential bid. But you have to wonder how long he can keep this up – and why he’d want to when he’s at under 3% in the polls.