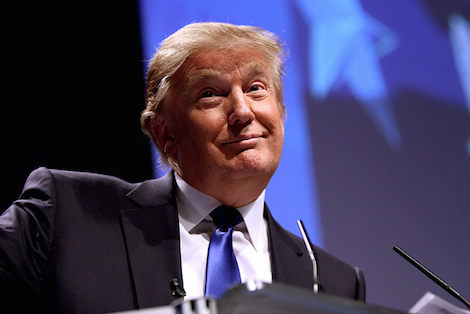 So as Jackie Calmes of the New York Times reports today, the Trans-Pacific Partnership mega-commercial deal is hanging fire at the final negotiations level, and the powers that be in both U.S. political parties are a bit conflicted about the likely domestic fallout if the deal is signed very soon.

This has conventionally been thought of as a problem for Democrats, given the deep investment the president has in this deal, and the strong opposition to it expressed by unions, other progressive constituency groups, and Democratic presidential candidates not named Hillary Clinton (who has somehow managed to avoid taking a position). But as Calmes notes, Republican political and business elites, who are unanimous in favoring the deal, are worried that you-know-who could make it a big campaign issue:

The Republican front-runner, Donald J. Trump, the billionaire who boasts of his own deal-making prowess, has called the emerging trans-Pacific agreement “a disaster.” While some Republican rivals also are critical, it is the rhetoric of Mr. Trump, given his celebrity appeal, that has Republican leaders more worried that a toxic trade debate could threaten vulnerable Republicans in 2016. Senator Mitch McConnell of Kentucky, the majority leader, supports a Pacific accord but nonetheless wants to protect his narrow Republican majority — and deny Mr. Obama an achievement.

Greg Sargent, who has been prescient on this topic, thinks TPP could provide Trump with fresh kindling for his insurgent presidential campaign. I’d add it’s right in his wheelhouse as an initiative pushed by Republican elites that is almost instinctively suspect among the white working class voters who represent the heart of Trump’s base of support.

Now if the TPP discussion continue to drag on, the 90-day Congressional review provision in the fast-track legislation already adopted could push a final vote past the red-hot moments of the presidential nominating process. If, however, the deal gets wrapped up briskly, look for some real problems in Washington and on the campaign trail. It’s not like the next few months are going to be easy for anyone in American politics.