The world is not short of discourse about guns and violent crime at the moment, but some facts bear highlighting, and more emphasis, throughout that discourse.

First, the NRA is the lobbying and PR arm of a small industry whose business is to make and sell as many guns as possible.Â  If the corn merchants could make up a story about high-fructose corn syrup protecting Americans from government and burglars, and find a piece of the constitution to misread, they would do it and we would all gain ten pounds.Â  The NRA’s business is not freedom, or recreation, or American tradition; it is money. Mass killings are especially profitable for their masters, as frightened citizens run out and buy more weapons.

Second, there are guns and guns. When I was a teenager, before I got interested in girls, I was something of a firearms hobbyist and dispatched reams of paper targets and some small game, even spending a year on the college rifle team before I got bored with it. Distinctions can be firmly drawn among guns whose purpose is target shooting, guns whose purpose is killing animals in the wild, and guns whose purpose is killing people. The ideals in the last category are automatic pistols with large magazines, short-barrel cylinder-choke shotguns, and machine guns; the last of these are illegal but fairly easy to make out of their close cousins, semi-automatic assault rifles and carbines. Killing (i) a lot of (ii) people, period. The targets with which these are practiced are human silhouettes, with higher scores for hitting lethal areas. 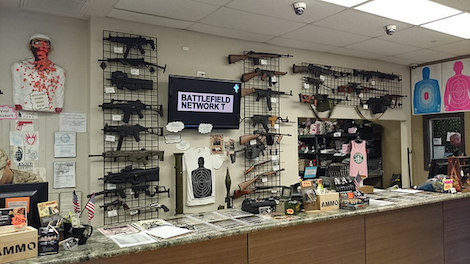 Sporting firearms are almost entirely owned by a shrinking but still large group of people who keep them locked up and use them for hunting and target (paper or clay pigeons) practice. They teach their kids to shoot safely for people and lethally for the game, and know not to mix gunpowder and alcohol. No firearms legislation contemplated or proposed by anyone puts those weapons at risk, or should.

Most of the people-killing hardware is in the hands of two categories of owners. One is plain criminals, and everyone agrees they should be relieved of them. The second is folks who are more or less deranged in one or more of three ways. Some are afraid that the US government is going to take over the country and become the government of the US, and have the completely loony idea that their firepower will be more than a bee sting against the real army, should the US government try to compel them to obey the laws of the United States.Â  Others imagine violent criminals accosting them in the street or in their homes, and expect that they will get their piece out of the drawer by the bed, or their holster, like a movie action hero in time to make a difference.Â  Both groups ignore the amply demonstrated fact that their self-defense weapon is many times more likely to kill a loved one, in an argument that escalates or in a suicide, than to ever deter a crime.

Many years ago, my colleague Mark Moore floated an idea that makes more and more sense to me in the current political paralysis. Congress should require everyone owning a handgun, or a long gun not suitable for hunting, to have a license, renewable every five years at no charge, and should authorize/deputize, and fund, the NRA as the sole issuer of that license. When a firearms outrage takes place, it will be a matter of public record which NRA functionary, supervised by which NRA executive implementing what protocol, thought it would be OK for that perp to be armed, on the basis of what evidence, and not just that Wayne La Pierre is mouthing bromides about abstract rights. (That history would of course be of special interest to plaintiffs’ lawyers.)

The constitutional provision requires deference, and I am quick to say that I am a strict constructionist on this issue.Â  I have no problem explicitly authorizing every citizen to possess the most lethal weapon the founders could have imagined when the second amendment was drafted: any muzzle-loading black powder single-shot flintlock (or touchhole) firearm, from a dueling pistol right up to a naval cannon, is OK with me as an American birthright privilege, and I would march in the street to protect your right to have any of those things.

Yes, you can have a bayonet on the rifle.