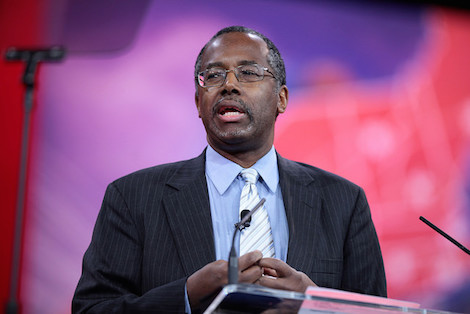 Two months ago, Dr. Ben Carson publicly started raving about Saul Alinsky-inspired liberals like Hillary Clinton plotting to destroy America on the stage of a presidential candidate debate. A little over a week ago, David Corn of Mother Jones published an extensive article on Carson’s deep and very recent attachment to the Bircher conspiracy theories of Cleon Skousen. Even more recently, Carson’s embraced the idea that we need a right to private gun ownership in order to resist domestic “tyranny,” which is a bit alarming coming from a person who repeatedly asserts America is “very much like Nazi Germany.”

Yet in a newly published summary of Republican voters in Iowa and New Hampshire, Bloomberg Politics finds that Carson’s main appeal is what a calm, unifying figure he cuts. Seriously.

What explains the appeal Ben Carson, the retired neurosurgeon who, despite never having held political office, is mounting a serious challenge for the Republican presidential nomination?

Simultaneous focus groups conducted by Bloomberg’s Mark Halperin and John Heilemann in Iowa and New Hampshire on Monday shed light on that question, and may help explain the doctor’s strong polling numbers.

When asked to describe Carson, participants in the focus groups called him “deep,” “thoughtful,” “intelligent,” “measured,” “true to himself” “someone you can trust” and “calm.”

“He seems like he’d be more of a—a soothing balm,” Judi, a custodian from Iowa, said.

“I think there’s nothing common anymore about common sense. And I think he has the mentality that he can look at an issue, carefully weigh the facts, and make sound decisions,” Scott, a who manages subcontractors for defense control in New Hampshire, said.

“I think his brilliance would help us solve problems thinking outside the box,” said Marie, a teacher and librarian from New Hampshire, where a majority of focus group participants said they believed Carson would eventually become the Republican nominee.

Yeah, I’d say blaming America’s problems on a communist conspiracy that dates back to the Wilson Administration and that encompasses most Democrats is an example of “thinking outside the box.” And for that matter, whether you think it is relevant or not, Carson’s many fans don’t seem to be aware that he belongs to a faith community that pretty fundamentally holds this incorrigibly evil world will soon be consumed by divine fire, an event that will be immediately preceded by the Satanic imposition of compulsory Sunday worship.

Is the dramatic gap between perceptions of Carson and what the man is saying and seems to believe purely a matter of style mattering much more than perception? I mean, it’s true Carson never raises his voice when saying crazy things. And moreover, he does constantly talk about the need to stop demonizing people with whom you disagree–a trait he attributes, however, primarily to the evil Alinskyite demons plotting to divide Americans and keep them from adopting the obvious common-sense right-wing “solutions” to every problem.

My own theory is that conservative media simply aren’t going to criticize Carson for a world-view shared by a significant part of “the base,” and the MSM either doesn’t take Carson seriously enough to look beyond “black conservative” stereotypes, or really doesn’t understand the dog whistles he keeps blowing. Either way, it will be fascinating to see if he can keep walking on the wild side of right-wing ideology while lulling observers to sleep.