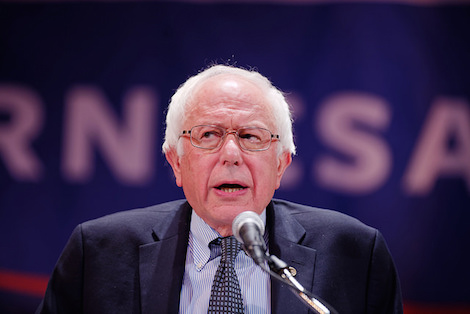 Most of the talk about tonight’s first Democratic debate has revolved around Hillary Clinton and her need to be “likable” or “personable” or “authentic” or what have you, and the “also run” candidates like O’Malley and Webb who have an opportunity for massive publicity and buzz if they make an impression tonight.

But as Harry Enten at FiveThirtyEight noted yesterday, the debate also provides Bernie Sanders with an unmistakable chance to address his candidacy’s one big shortcoming: his relatively poor levels of support among the nonwhite voters who will play a huge role in the nominating contest once Iowa and New Hampshire are in the rear-view mirror.

As Enten illustrates, Sanders has significantly lower name ID among these voters:

Sanders started off this primary known to a similar percentage of whites, blacks and Hispanics; around half of all three groups had neither a favorable nor unfavorable opinion of him. But while the share of whites without an opinion of Sanders has steadily declined, his campaign simply hasn’t grabbed the attention of minorities.

Maybe this doesn’t seem that surprising: Sanders is white, and he comes from an overwhelmingly white state, Vermont. But this problem appears unique to Sanders among Democratic candidates. At least 87 percent of whites, blacks and Hispanics have an opinion of Hillary Clinton, according to the most recent YouGov poll. Lesser-known candidates also have similar name recognition among both whites and non-whites. Martin O’Malley and Jim Webb, for instance, show little gap in name recognition among the different demographic groups.

This phenomenon leads back to the theory that there’s something about Bernie–perhaps his tendency to frame all issues as economic in nature–that doesn’t grab nonwhite voters. Indeed, as Enten notes, perhaps the widespread assumption that nonwhite voters are more inherently liberal than white voters–at least within the context of self-identified Democrats–is simply inaccurate. African-American voters, for example, have tended to support less outspokenly progressive presidential primary candidates dating all the way back to 1972.

But in any event, after tonight the counter-theory that Bernie’s just been focused on IA and NH and hasn’t had a chance to broadcast his message into states with substantial black and brown electorates will become weaker. We’ll see if he can show some progress.