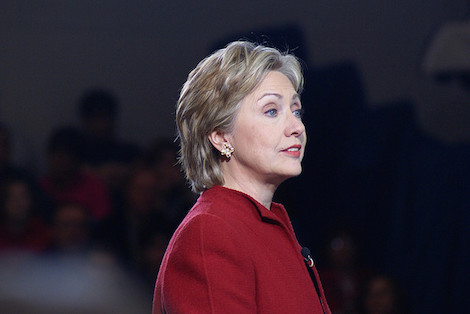 Sticking with the socialism theme, here’s a juicy tidbit from the huge Glenn Thrush/Annie Karni piece on the Clinton campaign’s handling of the email controversy:

[Hillary] Clinton appreciated Sanders’ respectful campaigning style, but she was slow to view him as a serious threat. During one of her summer swings through the Midwest, she answered one supporter’s question about Sanders with her signature chuckle, saying, “Come on. … The man is a socialist!” At a fundraiser in the South around the same time, an attendee told us, Clinton told the group that all the major Democrats “agreed” on most basic policy issues except for one, “who doesn’t even believe in capitalism.”

Of course, Bernie confirmed his anti-capitalist credentials on Meet the Press. Obviously, most people think this is a curious strategy, including the folks at First Read who are handicapping tonight’s debate:

Bernie Sanders: He simply has to come across as electable. Sure, he’s faring well in many general-election polls right now. But make no mistake: His comment on “Meet the Press” Sunday that he’s not a capitalist isn’t a winning general-election message, especially when being a socialist running for president is more unpopular than being a Muslim or an atheist. Another question we have: How does Sanders hold up over two hours of debate? One way to judge tonight’s debate is to gauge who does a better job shoring up his/her weakness — Clinton’s not-always progressive views vs. Sanders’ electability doubts.

So, either socialism gets redefined in the public’s mind pretty quickly or Hillary’s right and you can swat Sanders away like a bug simply by invoking the deadly “socialism” word.

What do you think?