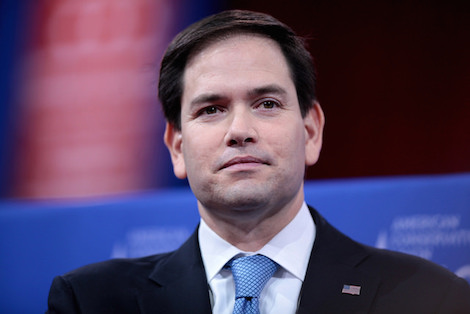 In the “sub-primary” involving Establishment-favored GOP presidential candidates, the premiere match-up, now that Scott Walker’s out of the race, is between Jeb Bush and Marco Rubio. Jeb has three advantages: money, money and a perceived position of strength in their common home state of Florida, which is holding a potentially decisive winner-take-all primary next March 15. Rubio has gauzy approval ratios, indicating party-unifying characteristics. Obviously enough, if Bush turns around his perpetually lousy approval ratios or Rubio hits the lottery, the dynamics could change quickly.

The latter could happen sooner than you might think, according to a piece at Politico by Alex Isenstadt. Rubio is currently angling for support from several mega-donors who have stayed on the sidelines, beginning with the richest of them all, Sheldon Adelson:

Last week, during a campaign swing through Las Vegas, Rubio held a meeting in Adelson’s offices at the Venetian Las Vegas, one of a number of five-star luxury casinos the billionaire mogul owns around the world. Adelson, seated at the head of his conference table, heaped praise on Rubio’s performance while he discussed the dynamics of the 2016 race. Those briefed on the meeting described it as short but said it had an air of importance, with the two joined by Rubio’s campaign manager, Terry Sullivan, and a pair of senior Adelson advisers, Rob Goldstein and Patrick Dumont.

Those close to Adelson — who spent more than $100 million on Republican candidates and causes during the 2012 campaign and has been aggressively courted by most would-be Republican nominees — stressed that the 82-year-old gambling magnate had made no final decision on whom he’d support but said that momentum had strongly shifted to the Florida senator. A formal endorsement, they said, could come as soon as the end of the month — and with it, the potential for a multimillion dollar contribution. With a net worth of $25.7 billion, according to Forbes, Adelson can afford to spend freely.

Team Rubio is also thought to be in a reasonably good position to secure support from New York hedge fund titan Paul Singer, Wall Street legend Charles Schwab, and the former Walker donors of the Ricketts family. But here’s the name that may freak out Rubio’s rivals:

The Kochs are not expected to endorse a single candidate but rather to wait out the primary. Yet as Rubio supporters gathered in Las Vegas last week, many were surprised to see a top Koch official, Phillip Ellender, in attendance.

In an email, Ellender, who heads up the Kochs’ government and public relations division, said his attendance at the event, and support for Rubio, is independent of “the company I am privileged to work for.”

Yeah, I’m sure Ellender can do any damn thing he wants. If he was for Bernie Sanders, that would be cool in Wichita.

In any event, Rubio’s progress with mega-donors is worth watching closely. We’re all in the habit of referring to Rubio as the smart-money favorite at this point. Adelson’s flyer on Newt Gingrich in 2012 notwithstanding, most of these birds don’t often throw good money after bad.