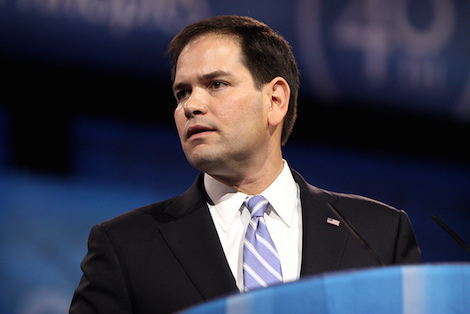 Sen. Marco Rubio (R-FL) on Wednesday morning lamented that the Democratic presidential debate was merely a competition over who would grant the American people more “free stuff.”

“If you watched that debate last night it looked like something from the early ’80s,” Rubio said on “Fox and Friends.” “It was basically a liberal verses liberal debate about who was going to give away the most free stuff: Free college education, free college education for people illegally in this country, free health care, free everything.”

Yeah, yeah, I’m sure all that time the candidates spent on guns and Syria and Libya and banking regulation they were really pining for another opportunity to compete over who would offer those people the most Obamaphones or something.

While this is mostly standard right-wing fare, Rubio probably should be careful about mocking people who want to go back to the “early 80s.” He does remember who was president then, doesn’t he?