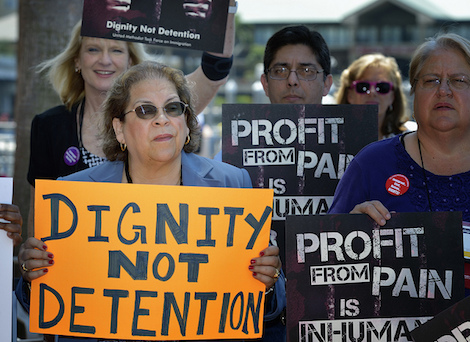 Over the last couple of weeks, there has been some good news about the continuing momentum for criminal justice reform.

As I wrote last week, the implementation of the U.S. Sentencing Commission’s application of the Fair Sentencing Act retroactively means that over the next year, approximately 14,000 non-violent drug offenders will be released from federal prisons.

Just prior to that, the Senate Judiciary Committee reached a bipartisan agreement on a bill to reduce some mandatory minimum sentences.

The bill would reform federal prison sentencing to reduce some of the automatic and harsh punishments Congress passed since it began cracking down on drug use. It would end the federal “three strikes” rule and limit the use of mandatory 10-year sentences for offenders who have not committed violent or major felonies.

Beyond reforming the length of some prison terms, the bill would also bulk up rehab programs for selected inmates, including job training, drug treatment and religious programs designed to reduce recidivism. The proposal also restricts the use of solitary confinement for juveniles, an increasingly controversial practice in American prisons.

Much of the legislation, tentatively titled the “Criminal Justice Reform and Corrections Act of 2015,” draws on bills previously introduced by reformers in both parties, including Democrats Pat Leahy, Sheldon Whitehouse and Cory Booker, and Republicans Mike Lee and Rand Paul.

That starts the process in the Senate. But what about the House? In that body, Rep. Bob Goodlatte chairs the Judiciary Committee. Can anything happen as long as he is in charge? Apparently it can.

A new criminal justice bill was unveiled in the House of Representatives on Thursday, the latest sign of momentum for a bipartisan cause that backers hope will produce reforms by the end of the year.

The agreement is the latest effort to overhaul draconian sentencing laws that have sent the U.S. prison population skyrocketing in recent decades. The package comes on the heels of bipartisan legislation introduced last week by a wide-ranging and influential group of senators, which was hailed by advocates as the most criminal-justice reform proposal in a generation.

The new House bill, crafted by House Judiciary Committee chairman Bob Goodlatte (R-Va.), his Democratic counterpart John Conyers and others, focuses on sentencing reforms and serves as a companion to the Senate proposal.

Right on the heels of that announcement, we got this news.

U.S. Sen. Cory Booker’s legislation to prevent federal agencies and contractors from asking applicants about any criminal record until making a conditional job offer passed a committee Wednesday and headed to the Senate floor.

Jared Bernstein and Ben Spielberg have written an excellent article about how this is an important step in the process – both in terms of the economy and the justice issues involved.

As a way to highlight why criminal justice reform retains this kind of momentum in Washington despite the fear mongering on the issue coming from some of the Republican presidential candidates, one need look no further than recent events in the very red state of Utah.

A bill that contained the measures, H.B. 348, passed out of the state Legislature on March 23. Republican Gov. Gary Herbert signed it about a week later.

Some of the changes that are set to take place under the new law include reducing first-time and second-time drug possession convictions from felonies to misdemeanors, expanding mental health and substance abuse treatment services for offenders, providing opportunities for inmates to earn sentence reductions by completing specified programs meant to keep them out of prison in the future, and offering greater assistance to people transitioning out of prison.

Take a look at who was on hand at an event early this month to highlight this progress.

A number of other officials and lawmakers from the Beehive State were on hand at the event as well, including U.S. Sen. Orrin Hatch.

Yes, indeed. This might be the only time you’ll hear me say this, but I agree…Congress really could learn a lot from Utah’s efforts.