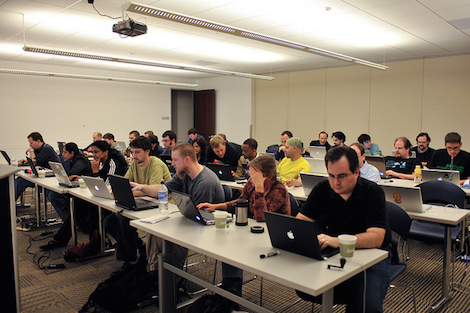 Today, the Department of Education unveiled a new initiative to use an experimental site to issue federal student aid dollars to innovative programs like bootcamps where students enroll in relatively short programs (often three to six months) to learn coding skills and gain high paying jobs. These boot camps, and other programs like them, are arguably the most exciting type of postsecondary education to emerge in the last decade. If the federal government gets its way, it will likely suck most of the innovation out.

It is no accident that these innovative programs developed without of federal student aid funding, and if we want them to keep innovating, the federal government needs to stay out. Bootcamps succeed because they respond to incentives that don’t exist in the Title IV aid program. Namely, their price must match labor market demands or outcomes. Institutions like App Academy are so confident in their product that their students pay no tuition. The students pay a percentage of their first year’s income instead.

As soon as federal dollars touch these programs, they will become hopelessly distorted

This looks a lot like the risk-sharing proposals that schools currently receiving federal student aid have mounted strong opposition against. Except in this case, outside of federal aid, the school voluntarily made it a part of their product. Noticing that these programs are actually functioning, the federal government (including Republican lawmakers) want in on the action. But as soon as federal dollars touch these programs, they will become hopelessly distorted. Instead of students selecting educational programs for high job placement rates and schools accordingly tying their price to students’ post-graduate outcomes (as they do now), federal financial aid dictates that providers will get money as long as the student enrolls–an input model, not an output model.

There once was another highly innovative industry that federal aid ruined. For-profit companies using online distance learning tools were seen as a brand new way to educate students at lower costs (online education is still seen as the future by many, and it may be). What we failed to understand was that online programs were only innovative when they had to survive in a real market. In 2006, schools were no longer required to teach at least 50% of the program on campus, thus opening up the crazy online degrees we have now (that also exist at prestigious universities) with little or no evidence they lead to positive outcomes for students.

So too would the boot camps. The Department of Education is looking into making new programs eligible in order to make sure low-income students still have a chance at high-quality, innovative programs. But what starts as expanding access ends with bad actors taking advantage of federal dollars with no strings attached. In their notice in the federal register, the Department claims this is to increase access for low-income students. Unfortunately, as of now, these bootcamps have mainly functioned as finishing schools for people with bachelor’s degrees from elite institutions of higher education. Now we are talking about a lot of taxpayer dollars on the line for these new actors that might leave students with debt and no great job.

To be fair, the Department has promised to bring in a something called a Quality Assurance Entity (QAE), which is an independent entity expected to do a better job of holding schools accountable than traditional accreditors by asking questions like, “what is the evidence that the learning claims are commensurate with postsecondary- or post-baccalaureate level work?” and “does the assessment correlate with other measures of the desired performance meant to be assessed?” Eventually, the QEA is expected to judge the value of the program based on job placement outcomes and debt-to-income ratios. This has some people excited, because it is seen as a way for the Department to impose more quality standards on institutions. What’s troubling though, is that this ex-site will more likely “validate” the idea of these new types of programs, and then Congress will allow them in with watered down accountability standards. If you think for-profit schools are bad now, just wait until they can receive even more Title IV aid in less time.

And besides, if the government holding schools accountable means tying costs to labor outcomes, the market is already doing that. Why mess with that? Republicans should be against forcing taxpayer money in and thus distorting a now functioning market. Democrats should be opposed to the next “for-profit” disaster. Let it be.