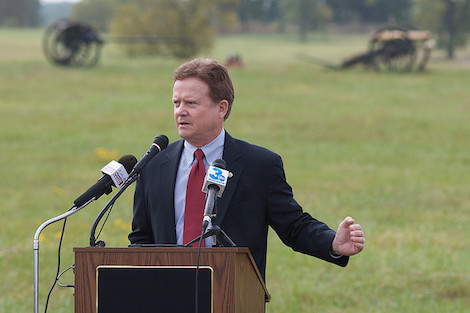 We may get a presidential candidacy announcement today after all: former Senator Jim Webb is going to fold his barely breathing Democratic presidential nomination campaign, according to Politico‘s Nick Gass.

Webb will not, apparently, say much about his own campaign’s suggestion yesterday that he’s now exploring an independent presidential bid.

You could see how this might theoretically make some sense. Webb is the self-proclaimed tribune of the white working class folk who have been alienated in significant numbers from Democrats in recent years, and who are now rebelling against the elitist economic policies of Republicans via Donald Trump’s candidacy. Though conventionally liberal on a lot of subjects, Webb’s got enough of the “radical middle” mojo going to merit a brief look from such voters.

On the other hand, the man actually has no history of succeeding with downscale white voters, even the Appalachian Scots-Irish he wrote an entire book about and seems to personally represent in a visceral way. In his one statewide election in 2006, Webb won with pretty much the same urban-suburban coalition as Richmond civil rights lawyer Tim Kaine a year earlier (ironically, the only Democrat to win Scots-Irish southwest Virginia in a competitive election in many years was NoVa techno-weenie Mark Warner in 2001).

And then there’s the little question of money: indie races for president cost a large fortune, and Webb doesn’t have even a small one.

There may be a buzz about a Webb indie run for a while because any credible third force, however small, could matter in a close election, and also because some Villagers may promote the idea before they remember that Webb’s not exactly a Broderite compromiser by nature. But in the end the suggestion is likely to go nowhere fast.