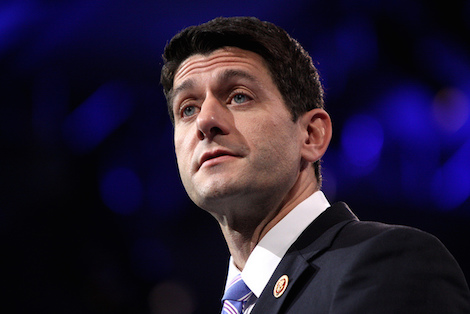 According to the most authoritative account we have of what went down when House Republicans met last night, from WaPo’s Robert Costa and Mike DeBonis, Paul Ryan’s agreed to be Speaker if and only if an unprecedented array of “conditions” are met. Some involve his much-reported demands for free weekends back in Wisconsin and reduced fundraising duties. But the real challenge he’s posing is the requirement that the House Conference’s main ideological groupings all endorse him by Friday and essentially promise in advance that they will never threaten him with the kind of defenestration suffered by John Boehner and Kevin McCarthy.
In fact, he’s proposing to remove the very lever that led to Boeher’s early departure: a mechanism whereby a majority of House members can at any moment remove a sitting Speaker.

So in effect Ryan’s telling the House Freedom Caucus, the only grouping likely to resist his takeover, that they have the power to veto him between now and Friday, but if they don’t they’d better put on the party harness.

What’s unclear is where Ryan is on the “procedural reforms” Freedom Caucus members keep talking about that would reduce the Speaker’s power to control what legislation comes to the floor and the sanctions that can be used to suppress dissent. They certainly cut against the consolidation of power Ryan clearly wants. But he did make one substantive concession to the ultras: he promised not to bring any comprehensive immigration reform bill to the House floor any time soon (presumably one like the Senate bill, that could be passed with Democratic votes).

In another account of developments in the House last night, National Review quoted Rep. Tim Huelskamp (R-KS) complaining at some length about Ryan’s conditions.

“The best thing I can assume is that he really doesn’t want the job,” he says. “You put forth a list of conditions that nobody is going to throw their weight behind, and force people to tell you ‘no,’ rather than the other way around . . . that’s the only thing that makes sense to me.”

If the Freedom Caucus does tell Ryan “no,” the assembled Republican Establishment and MSM commentariats are going to come down on them with thunderous condemnations. It will be fascinating to see if they seize their one avenue to a demonstration of power, or go quietly into probable irrelevance.