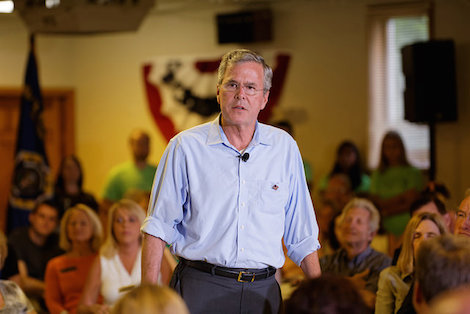 Today’s lengthy but interesting read is a two-part interview of Bush Super-PAC majordomo (and overall chief Bush strategist) Mike Murphy by data geek Sasha Issenberg at Bloomberg Politics, which was apparently conducted at some point in early October. In the first installment Murphy dismisses Donald Trump as a “zombie candidate” who will either fall apart or withdraw by the time actual voting begins, and boasts that nobody but Jeb in the non-zombie field has the money to effectively blanket the array of states that begin to hold contests on March 1 with paid media. In the second installment Murphy adopts the “two lanes” theory of the nomination contest and ignores Trump and Carson as candidates in “the other lane” while tossing out criticisms of the candidate’s in Jeb’s “lane,” which are basically Rubio and Kasich (Christie gets a brief mention, but it doesn’t sound like Murphy’s worried about him).

In the second interview in particular, Murphy and Issenberg engaged in some techno-babble about the limitations of a Super-PACs in social media that I could barely follow. But overall, it’s extremely clear Murphy wants to convey the impression that all the gabbers who are focused on polls and debates and other candidates’ strategies are entirely clueless, because Jeb’s got this well in hand. Here’s an illustrative graph:

So we’re doing a lot of lab experiments with different creative. We take ad concepts we have and we do a lot of online testing. We’re very also interested, frankly, in the four million voters—like three and a half—who are going to decide the general election, so we’ve already started a lot of data-mining work on that. We’re taking their IP and mobile-device life and finding ways to link it up to the voter-file history we already know, so we get the 360-degree picture on people and can communicate with them really well. That’s the Holy Grail of this.

Let’s just say for the sake of argument that Murphy’s right about the “two lanes” phenomenon, but not the assumption (which sounds less convincing now than just a few weeks ago) that Trump will self-destruct or go away without a big push. If Jeb’s lucky and smart and can overcome the temptation of his own donors to dump him as a hopeless loser for someone like Rubio, then he will get a one-on-one competition with Trump with the entire Republican and conservative movement Establishments in his corner. Sounds good until you realize (1) Trump has eaten Jeb’s lunch in virtually all of their one-on-one exchanges, and (2) Jeb’s approval ratio numbers, which matter even if the horse-race rankings don’t, aren’t any better than Trump’s these days, and (3) all the Establishment backing in the world won’t matter if the candidate loses in the wrong place at the wrong time, as Murphy should know from his experience in the 2000 McCain campaign, which very nearly croaked Jeb’s brother even though he enjoyed even more advantages than Jeb has today or would have as the winner of his “lane.”

Beyond all these questions is another very big one that nobody in the GOP or conservative Establishments seems prepared to ask, much less answer: if someone like Jeb beats someone like Trump, who stands for the repudiation of many of the economic policies conventional GOPers hold dear, is it entirely clear Trump’s white-working-class centered constituency will tug the forelock and turn out for a figure they clearly loathe in November? I mean, these are not necessarily like the conservative evangelicals whose ultimate support for Mitt Romney was in question early in 2012, who would not vote for a Democratic presidential candidate if Jesus Christ personally endorsed her or him. These are people strongly alienated from everything Jeb Bush represents. The bottom line is that a one-on-one competition with Trump may be the only route to the nomination for Jeb Bush, but may not be the best route to the presidency.