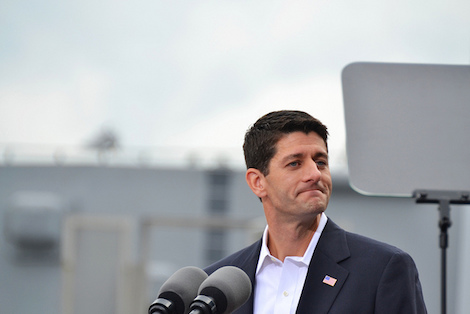 So at some point last night, after it became apparent he wasn’t going to get the support necessary for a formal endorsement as Speaker by the House Freedom Caucus, which he had demanded the day before, Paul Ryan decided a “supermajority” was enough and declared victory. This isn’t 100% arbitrary; it is clear Ryan has enough support to be elected Speaker by the full House without Democratic votes. But it’s still an indication that the intended coronation of Ryan–referred to this morning by WaPo’s James Hohmann as “the Prince of Janesville”–hasn’t been terribly smooth.

Earlier in the day Ryan courted the right-wing caucus pretty aggressively, and according to WaPo’s Robert Costa and Mike DeBonis, made some headway:

Ryan appeared to calm some nerves in the afternoon meeting, making clear that he did not want to end the ability of the House membership to remove the speaker — only change the procedures for doing so. He also gave reassurances that he would respect the “Hastert Rule” — the informal practice of former speaker J. Dennis Hastert that required the majority support of the Republican conference before moving legislation to the House floor.

Rep. Mo Brooks (R-Ala.) said Ryan agreed that legislation should be moved only with the support of the majority of the majority. In particular, he said, that calmed immigration hawks wary of Ryan’s past support for measures that would offer illegal immigrants a path to citizenship.

Strict observance of the Hastert Rule, of course, would take away the Leadership’s ultimate weapon against conservative obstructionism, the use of Democratic votes that has been essential in avoiding debt defaults and keeping the federal government open.

In any event, Ryan is now abandoning the posture of waiting to be asked by the entire GOP to run for Speaker, and votes are scheduled in the Republican Conference and the full House next week to wrap things up. In the meantime, John Boehner will try to get a debt limit measure through the House in the usual Kabuki manuever whereby the lower chamber attaches right-wing policy conditions the upper chamber surgically removes. If that final chore before Boehner is allowed to repair to the links in Florida gets screwed up, the “Prince of Janesville” may have an early test while the cheers over his accession are still echoing.