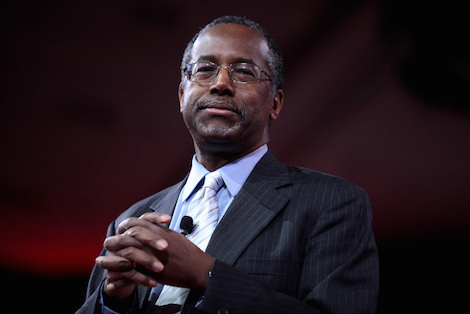 Since virtually all Republican voters currently love Dr. Ben Carson (or so suggest his nearly unanimous positive approval ratings among GOPers), and conservative evangelical voters are particularly attracted to him, David Corn, one of the few writers exhibiting interest in the good doctor’s world view, wants to know if all those good Christian folk are aware that Carson’s own denomination thinks they’ll be on Team Satan when the End Times roll around.

Carson is a Seventh-day Adventist who has publicly voiced his commitment to this church and championed its core beliefs, most notably the view that God created the world in six days (literally) and that evolution is bunk (and encouraged by the devil). He has spoken at Seventh-day Adventist events. In a 2013 interview with the church’s official news service, he was asked, “Are there ever any times when you feel it’s best to distinguish yourself from the Seventh-day Adventist Church and what it teaches?” Carson replied, “No, I don’t.”

In this interview, Carson went on to say that he was “proud of the fact that I believe what God has said…that I believe in a literal, six-day creation.”

Carson did not explicitly mention other Seventh-day Adventist tenets. But a central belief of the church is that most other Christian denominations will end up working with the devil. Seventh-day Adventists hold that the Sabbath should be worshipped on Saturday and that religions that observe the Sabbath on Sunday have been corrupted by Satan. The church’s early prophet Ellen White cast much of the blame for this supposed perversion of the Sabbath on the Roman Catholic Church.

White’s prophecies—rendered in the 1800s—are regarded as sacrosanct by the church. She predicted that when Jesus Christ returns to earth, per the Book of Revelation, and triggers the final and cataclysmic clash between God and the Antichrist, a paramount battle will be over the Sabbath. She foresaw the government, doing the devil’s bidding, outlawing the Saturday Sabbath, locking up Seventh-day Adventists, and even threatening them with death. And she prophesized that other Christian denominations would hold fast to the Sunday Sabbath and become handmaidens of Satan. Ultimately, Jesus Christ would vanquish Beelzebub, and only Seventh-day Adventists, because they stuck with the Saturday Sabbath, would join him in the kingdom of God. The other Christians? Well, they would be forever condemned.

Now it should be noted that Carson has in the past suggested he’s not very denominational in his thinking, and as Sarah Posner noted on Friday at Religion Dispatches, he often sounds more like a generic Christian Right figure than an Adventist:

As I’ve written previously, Carson has both embraced his Adventist faith and exhibited deviations from it. He proudly declares his Adventist faith when asked, but his statements relating to gun control and Muslims, for example, conflict with Adventist teaching on non-violence and religious freedom. Adventists, as a religious minority whose fear of persecution is embedded in their end-times theology, have long been protective of religious freedom and church-state separation. But Carson has doubted a Muslim’s suitability for the White House; in that, he is aligned with the 69 percent of likely Iowa Republican caucus-goers who told the Bloomberg/DMR pollsters that it would be unacceptable to have a Muslim president.

Personally, it strikes me as unusual that any serious premillenialist would be all that invested in politics, the epitome of the devil’s playground in an inherently wicked world. Moreover, while Carson does seem entirely willing to characterize fellow Americans as evil, he seems to save demonization for “secular progressives” rather than the non-Adventist Christians that his co-religionists fear want to make them go to church on Sundays. Since the conservative and mainstream media have all largely failed to penetrate Carson’s irenic demeanor and “common sense” rap to take a look at the writhing snakes of unreason that seem to inhabit his mind, I have a hard time imagining them conducting any sort of theological examination of the man. And maybe they shouldn’t. But all in all, this is a dude who believes a lot of things that should produce disapproval numbers a whole lot higher than single digits.