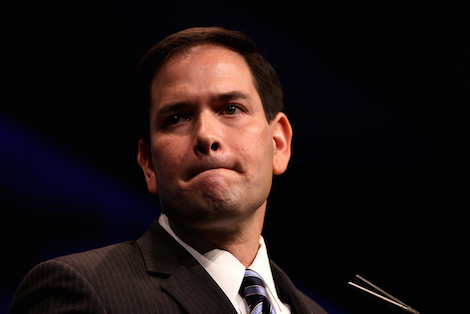 TNR’s Brian Beutler has a shrewd column up today suggesting that smart-money favorite for the Republican presidential nomination Marco Rubio is not, as Jeb Bush keeps calling him, the “GOP Obama,” but rather a conservative analog to John Edwards.

By that Brian does not, I would hasten to add, suggest the Florida Senator’s sexual ethics are questionable, or that there may be some love child out there wearing a “I am the granddaughter of a bartender” t-shirt. No, he’s talking about Rubio’s claim he can work magic for his party with certain key demographic groups:

The GOP has been at odds with itself for years now over whether the path to victory in national elections runs through maximizing white voter turnout or appealing to the policy preferences of non-white voters. Trump embodies the former theory, Rubio the latter—to a point. Rubio famously repudiated his own immigration reform bill and has foreclosed the possibility of making unauthorized immigrants eligible for citizenship during his presidency. But he’s also hedged and obfuscated enough on the issue that he could feasibly correct course again during the general election before his impression in immigrant communities fully settles. Likewise, and in contrast to most Republican candidates, he’s expressed empathy with black and brown people who have grown to distrust law enforcement, and has a real claim to understanding the challenges poor and working-class Americans face.

But Rubio is also making the most shallow appeal of any Republican in the field. The undisguised promise of his candidacy is that his youth and background will allow him to herald an orthodox Republican policy agenda as somehow distinct and visionary. Perhaps because his heterodoxies are so superficial, Rubio enjoys the support of only 23 percent of Hispanic voters, lower than the paltry share that voted for Mitt Romney in 2012.

In this way, Rubio resembles the Republican Party’s answer to John Edwards rather than a genuine reformer, like Clinton. Both Clinton and Edwards banked on their meager Southern upbringings—the man from Hope and the son of a mill worker, respectively—to appeal to culturally conservative, Republican-leaning constituencies. Clinton, who ran at a time when the Democratic Party needed to widen its appeal, and on a platform that genuinely deviated from party doctrine, became president. Edwards first ran as a second coming of Clinton in 2004, when Democrats were haplessly trying to out-warrior Republicans. He ran again four years later, at a moment when Democrats were ascendant, as a doctrinaire progressive with a Southern accent. He lost both times.

If Edwards represented the (frankly rather empty) claim that sounding southern would attract otherwise unreachable southern white voters, Rubio represents the equally questionable idea that a Cuban-American conservative from Florida whose spent much of the last two years apologizing for his prior support for comprehensive immigration reform is going to get a big vote from Mexican-Americans and other Latinos. The same is true of the belief by some Republicans that Rubio’s relative youth will allow him to break into the under-30 element of the Obama Coalition–even though Rubio is conspicuously attached to a Cold War point-of-view about the world we inhabit, and is the kind of cultural conservative who generally repels millennials.

Personally, I think if Marco Rubio wins the nomination contest it will be via a process of elimination, not some sort of wellspring of excitement over his potential to revolutionize politics. But if he emerges as the front-runner as so many handicappers expect, and the hype machine gets revved up big time, it will be entirely appropriate to mention the Edwards analogy now and then. As T.S. Eliot once put it in The Hollow Men:

Between the idea/And the reality

Between the motion/And the act