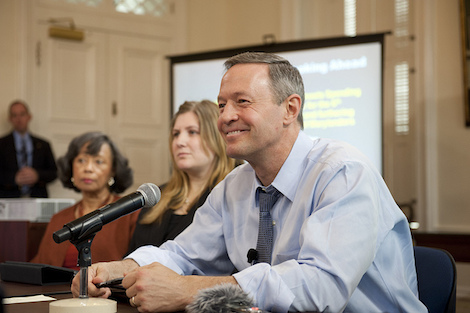 As you may recall, back before there was any talk about Bernie Sanders–much less Joe Biden or even Jim Webb or Linc Chafee–running for president, there was quite a bit of talk about former Montana Gov. Brian Schweitzer challenging Hillary Clinton.

I never much bought the idea of Schweitzer as a viable presidential candidate, even back when a lot of the cool kids thought some sort of quasi-liberaltarian Western Populist strategy was the political wave of the future. Then his presidential trial-balloon mostly involved trashing the Democratic President of the United States, a real non-starter in my view:

Schweitzer’s sure taking an unorthodox route to a Democratic presidential candidacy. Yes, his complaints about Obama’s record are shared by quite a few progressive folk. But generally trashing Obama—or for that matter, trashing HRC—is not the way to build a base for a presidential campaign. According to the latest Gallup numbers, Obama’s job approval rating among self-identified liberal Democrats stands at 84%. That is rather high. Among African-Americans, who play a huge role in many Democratic presidential primaries, it’s at 86% (it’s only 58% among Hispanics, but that includes a decent number of Republicans).

As I’ve observed on more than one occasion, left-bent Democratic presidential nominating candidacies have failed again and again because of poor support from minority voters. There’s virtually nothing about Brian Schweitzer that gives him a natural connection to these voters (unless you count his reported proficiency in Arabic as appealing to Muslims). Making common cause with Republicans in Obama-bashing isn’t going to help.

I mention all this because Schweitzer just resurfaced at the outmost periphery of the presidential contest by endorsing Martin O’Malley’s candidacy. Interestingly, both his statement of endorsement and O’Malley’s statement hailing his endorsement mention that the two former governors “don’t agree on every issue.” I’m guessing this is an allusion to Schweitzer’s famous opposition to gun regulation, a bedrock principle of Western Populism that does not play real well among Democratic audiences in Iowa or New Hampshire. But in any event, Schweitzer’s reduced standing in national Democratic politics suggests maybe he should have given more consideration to a run for the Senate in 2014. Had he run and won, he’d be a really big deal right now.