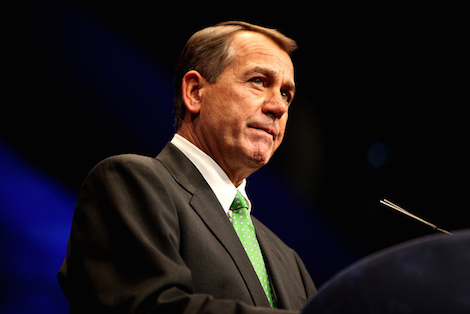 Well, you have to credit John Boehner and Mitch McConnell with some chutzpah. On the very eve of Paul Ryan’s planned accession to the House Speakership via a deal with House conservatives to treat their views with more respect and avoid deals with Democrats, the GOP leadership is unveiling the largest bipartisan budget deal since 2011, a measure that would preempt any debt default or government shutdown threat until well after the 2016 elections. Moreover, even as Ryan pledges renewed fealty to the Hastert Rule and promises not to behave imperiously towards other Republicans, this deal was negotiated semi-secretly and will be sprung on Congress for a quick vote, perhaps as early as tomorrow, and is projected to get through both chambers via a minority of Republicans voting with most Democrats. It would indeed make it easier for Ryan to keep his promises because it would take the most contentious issues right off the table.

A lot of the details of the deal are unknown or hazy at this point, but it’s clear the main objective was to set aside sequestration and give Democrats some domestic spending increases and Republicans more defense spending. In that and other respects it resembles the budget deal Ryan himself cut with Patty Murray in December of 2013, not long after the last government shutdown, which constitutes one of the grievances conservatives harbor against the Wisconsin Ayn Rand acolyte.

I suspect the air today will be filled with squawking about this deal, and it could also prove to be a big fat target for the GOP presidential candidates who are debating economic and fiscal policy in Colorado tomorrow night. So yeah, Boehner and McConnell had best get a move on to get the deal approved before conservatives can counter-mobilize, and Paul Ryan should probably remember some pressing appointments back home in his district.