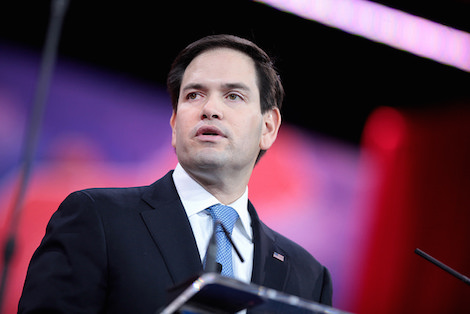 I have trouble thinking of Marco Rubio as a serious candidate, let alone a possible choice for the Republican Establishment, but that’s mainly because I know that Florida politics are a cesspool and that his time in the Florida legislature won’t stand up to national scrutiny. Nominate him at your own risk, but no one in their right mind would pick them as their running mate and that will become clear when they do their vetting.

Nonetheless, Rubio appears to belong in the trio of candidates who are acceptable to the Republican Establishment. And it’s telling that Rubio hates his job in the Senate, and that the other two hate the Republican electorate.

So, what I’ll be looking for in the tonight’s Republican debate is to see if the three Republican “Establishment” candidates are going to use their opportunity to speak about the most pressing issue facing their party. Ohio Governor John Kasich recently put it this way, “What’s happened to our party? What’s happened to the conservative movement?”

So, do Jeb!, Rubio and Kasich have an answer for that question? Are they going to try to get the Republican debate audience to wake up to the ridiculousness of telling pollsters that you want Ben Carson or Donald Trump to be the president of the United States?

I think the debate is supposed to be focused on economic policy which means that meta-converations about the state of the Conservative Movement might have to be crowbarred into answers to questions about things like the debt ceiling or Dick Cheney’s observation that St. Ronald Reagan proved that deficits don’t matter.

That’s fine, I think. I think the debt ceiling is a very appropriate place to begin discussing the Conservative Movement’s detachment from reality. Rand Paul will talk about filibustering the effort to pay our bills on time and Ben Carson will promise to never raise the debt ceiling during his presidency. Those will be prime opportunities for Jeb!, Rubio and Kasich to tell them to stop talking nonsense.

If they aren’t willing to confront the stupid-demons in the debate, then they should shut up about the tone and tenor of the campaign and just drop out.