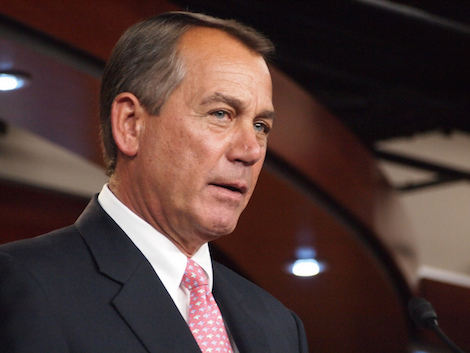 In the lead-up to the news that the White House and Congressional leaders had reached a sweeping 2-year agreement on both the budget and the debt ceiling, there was a fair amount of hand-wringing over the latter – with rumors that Republicans couldn’t even round up the 30 votes needed (in addition to 188 Democrats) to pass a clean debt ceiling bill. Of course it’s always hard to pin down the source of rumors like that. But frankly, it never passed the smell test for me.

What is really interesting is that they also compared these divisions to a similar breakdown they did in the last Congress prior to the 2014 midterms. While it’s true that Republicans gained seats, the shift that happened isn’t in the direction that is commonly assumed.

So far in 2015, the distribution of House Republicans looks less like a bell curve and more like a see-saw in which the ranks of Republicans willing to vote for bipartisan measures have tilted up and the ideological, anti-spending flank has tilted down. The “Coalition of the Willing” has increased from 61 to 86 members, while the “Deciders” – the critical group to watch in upcoming fights – have remained stable and the “Coalition of the Unwilling” has fallen from 63 to 35.

Just in case you are wondering, the likely next Speaker of the House Paul Ryan is one of the Dependables. So it should come as no surprise that – while he criticized the process that led to the budget deal – he plans to vote for it. If Boehner simply rallies the rest of the Dependables to vote with him, the deal will likely pass (as long as it gets broad support from Democrats). If anyone is worried about the left flank of the Democrats in the House, Co-Chair of the Congressional Progressive Caucus Keith Ellison has announced that he’s a “yes” on the deal.

There is no way of knowing what the final vote tally will be (Rep. Bill Flores predicts 70-90 GOP votes for the deal). But this information tells you a lot about why John Boehner had the confidence to negotiate an end to the chaos created by the Freedom Caucus as his parting “gift” to the malcontents.