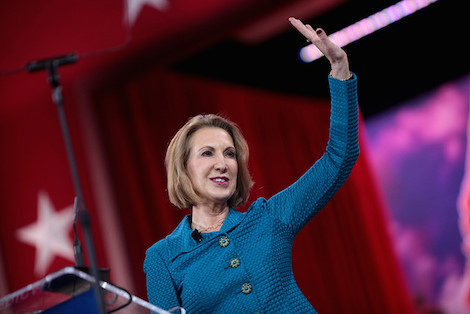 During the 2008 presidential primaries, it became obvious that candidates like Gingrich, Cain and Huckabee were co-mingling their campaign email lists with the dubious hawking of sketchy products for sale (i.e., spam). This time around, there is no shortage of people who think that Donald Trump’s designs have more to do with boosting his ability to make money as a reality TV star than to actually being president. Ben Carson’s motives for entering the race were questioned recently when he combined his campaign activities with a promotional book tour. And as Ed Kilgore wrote more recently, there are some real questions about who is benefiting from his campaign’s fundraising success.

Now comes news about how Carly Fiorina is parlaying her candidacy to line her own pockets.

Carly Fiorina is running for president – and also available for paid speaking gigs.

“I wanted to send you a quick, private note about Carly Fiorina. Though she maintains an active campaign calendar, she has limited availability for speaking engagements,” two separate sales representatives from the speakers firm Leading Authorities, Inc., wrote to prospective clients Tuesday morning.

“She is the former CEO of Hewlett-Packard, the first woman to lead a Fortune 20 company, a best-selling author, and the only female candidate for the 2016 Republican nomination for president.”

One has to assume that adding “candidate for the 2016 Republican nomination for president” to your resume ups the ante on how much you can charge for these paid speaking engagements.

If anyone wonders why Republicans attracted 17 candidates to the presidential race this year, you’d have to be foolish to dismiss this kind of thing as a big contributor.

Update: Fiorina’s campaign has responded to this report saying that speaking fees are donated to charity and with regards to the email that solicited speaking engagements: “We didn’t approve the email so we’re not sure why it went out.”