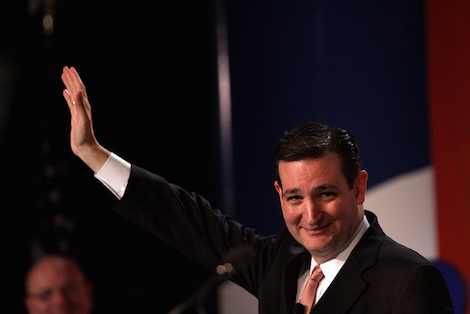 It’s not easy to get a grip on what happened in Boulder, Colorado last night at the CNBC-sponsored third GOP presidential debate. The questioning was limited to economic and fiscal policy issues (though that did not keep Lindsey Graham from his usual warmongering in the “undercard” debate), so we got just one mention of the babykillers of Planned Parenthood and relatively little thundering about Obamacare or the president’s alleged kowtowing to America’s enemies. But the constrained scope of discussion did guarantee mind-numbing scrutiny of the various candidates’ tax plans, and above all, a headache-inducing drumbeat of endless claims that Big Government and regulations are responsible for every human evil going back to the presumably laissez-faire Garden of Eden.

As noted in my insta-column on the debate for TPMCafe, the big and inscrutable surprise was that not a single question was asked about the budget deal that was enacted that very day, which seemed to validate every single right-wing conspiracy theory about the perfidy of the RINO Republican Establishment. Yes, Rand Paul brought it up in the context of his promise to filibuster the deal in the Senate, and Ted Cruz and John Kasich denounced it in passing. But the CNBC moderators seem not to have heard about it. Perhaps they were too busy preparing to lose control of the debate and to become punching-bags for the candidates.

I do not know why the simple expedient of turning off microphones when debaters egregiously exceed their time or interject without being recognized has not become standard at candidate debates, but last night’s fiasco should compel a fresh look at ways to exert control other than feckless shouting. By the time Ted Cruz shrewdly played his Newt Gingrich card by denouncing the moderators and the media to howls of approval from the very large live audience, it was obvious CNBC (ironically, given the presence of conservative war-horses like Larry Kudlow and Rick Santelli) had joined Hillary Clinton and Barack Obama in the Enemy Ranks.

At TPMCafe I did the usual “winners and losers” assessment without a lot of enthusiasm, figuring Cruz and Rubio got the most out of this shambles of a debate, though Trump and especially Carson did well to get out without major setbacks. One of the most telling moments of the entire debate was John Kasich’s clumsy effort to go after Trump and Carson as unqualified right from the get-go; he somehow forget to mention their names and descended into the VERY LOUD incoherence that marked his contributions to the rest of the event. The atmosphere of the debate was the perfect muddy track for Chris Christie, who was at his unpleasant best.

You’d think Jeb Bush’s Super-PAC money machine would have been revved up to combat the post-debate spin suggesting he utterly failed to do what he had to do in Boulder, but best I can tell perceptions of his performance have actually grown worse overnight, leaving him in some real peril of a free-fall. And by far the saddest figure was Rand Paul, who should have been super-energized by his lonely stance athwart the path of the budget deal, but look and sounded like he was ready to pack it in.

In my column I concluded Paul Ryan may have been the big winner of the night as well as the day by escaping with only minor criticism for his blatantly double-dealing role in the budget deal that appeared to take many of the challenges of being Speaker right off the table.

Believe it or not another debate is approaching very soon, on November 10 in Milwaukee, sponsored by Fox Business and the Wall Street Journal. That’s probably too soon for any “winnowing” to occur beforehand, but not too soon for candidates wanting to obliterate memories of this big old mess.