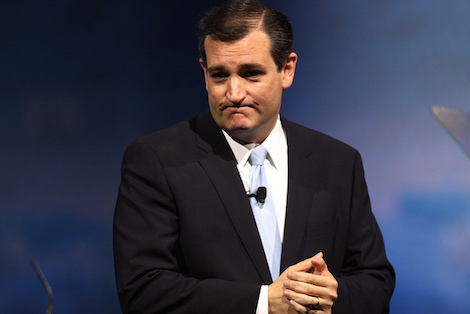 Before turning the page on last night’s CNBC debate, I do want to draw attention to what was probably the single dumbest moment, brought to us by probably the single smartest candidate on the stage, Ted Cruz. CNBC’s Rick Santelli, who seems determined to induce interest rate hikes, asked Cruz what he thought of the Fed’s current monetary policies. Here was the response:

I have got deep concerns about the Fed. The first thing I think we need to do is audit the Fed. And I am an original co-sponsor of Rand Paul’s audit the Fed legislation.

The second thing we need to do is I think we need to bring together a bipartisan commission to look at getting back to rules- based monetary policy, end this star chamber that has been engaging in this incredible experiment of quantitative easing, QE1, QE2, QE3, QE- infinity.

And the people who are being impacted, you know, a question that was asked earlier, Becky asked, was about working women. You know, it’s interesting, you look at on Wall Street, the Fed is doing great. It’s driving up stock prices. Wall Street is doing great.

You know, today, the top 1 percent earn a higher share of our income than any year since 1928. But if you look at working men and women. If you look at a single mom buying groceries, she sees hamburger prices have gone up nearly 40 percent.

She sees her cost of electricity going up. She sees her health insurance going up. And loose money is one of the major problems. We need sound money. And I think the Fed should get out of the business of trying to juice our economy and simply be focused on sound money and monetary stability, ideally tied to gold.

Amidst the gobbledy-gook, Cruz is endorsing a deflationary monetary policy and winking saucily at the gold bugs. Now most people taking this posture ignore current inflation indices and warn of “pent-up” demand or inflationary “pressures” that must be headed off. But Cruz seems to be arguing that inflation is out of control right now thanks to a Fed “loose money” policy that is “trying to juice the economy.” And a 40% rise in hamburger prices is the proof!

As someone who lives in and represents Texas, you’d think Cruz would be aware that high hamburger prices are principally the result of long-standing drought conditions in his state and other beef-producing areas (like California) that have driven up the price of feed extensively. The Fed has zero to do with that–or with the wet conditions in Texas that could bring beef prices back down in a year or two. Nor does the Fed have anything at all to do with energy or health insurance prices.

Moreover, you can cherry-pick price information all you want, but the underlying reality is that inflation does not exist in our current economy. We are on a trajectory for absolutely flat consumer prices this year. That’s why it was recently announced that Social Security beneficiaries will not receive a COLA in January. You’d think Cruz might have heard about that; it was pretty big news.