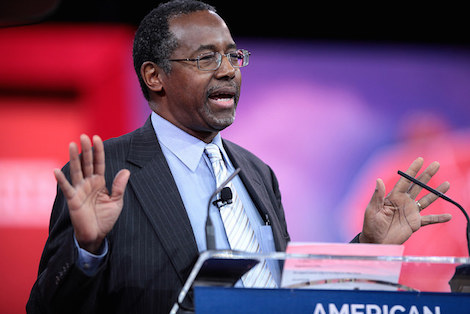 There’s one more bit of post-election news worth noting if you can avoid the mesmerizing sight of buzzards circling the suddenly toasty Bush campaign. Dave Weigel has the story:

Republican presidential front-runner Ben Carson told reporters Thursday that he was reaching out to every rival campaign to lobby for changes to future debate formats.

“Debates are supposed to be established to help the people get to know the candidate,” Carson said at a news conference before a speech at Colorado Christian University. “What it’s turned into is — gotcha! That’s silly. That’s not helpful to anybody.”

Carson, who got less time at Wednesday night’s CNBC-hosted debate than candidates who were faring worse in polls, was raising the already high-decibel volume of criticism. Shortly after the debate ended, Republican National Committee Chairman Reince Priebus tweeted that it had been ruined by “improper and unprofessional” questions from moderators.

“Using it for political purposes just doesn’t make any sense at all,” Carson said. “The first thing we’re looking for is moderators who are actually interested in getting the facts, and not just gotcha questions.”

Is that what was really going on? Not at all, argues Ezra Klein:

The Republican primary has thus far been a festival of outlandish policy. The candidates seem to be competing to craft the tax plan that gives the largest tax cut to the rich while blowing the biggest hole in the deficit (a competition that, as of tonight, Ted Cruz appears to be winning). And the problem is when you ask about those plans, simply stating the facts of the policies sounds like you’re leveling a devastating attack.

Bingo. It calls to mind Harry Truman’s famous jibe in 1948 that he wasn’t giving the Republican hell, but instead was “telling the truth about them and they think it’s hell.”

Now don’t get me wrong: the CNBC moderators did a lousy job of controlling the debate and let themselves get into shouting matches with candidates. John Harwood, in particular, adopted an imperious tone that suggested he has forgotten that seven of these birds have gotten more votes than he ever did. But if Republican candidates want a “debate” where it’s out of bounds to quote expert criticisms of the candidates’ proposals or appeal to the laws of mathematics, they really just want a joint informercial, for free.