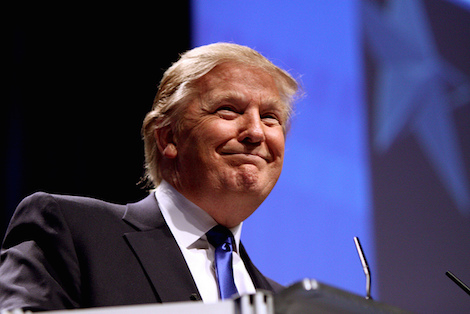 It’s hard to read about the reasons people have for supporting Donald Trump. People say the dumbest things and it hurts my spirit to see how people are misled or how disorganized their thoughts are, or how unsophisticated they can be.

But I have to remind myself that voters aren’t being given many choices in this election despite the unprecedented number of candidates. I mean, I can relate to the following sentiment even if its substantially different from my own:

Without ever having seen Trump’s reality TV show, “The Apprentice,” [Holly] Martin [a freelance technology writer] has come to think that he has a rare ability to get things done. She was a Republican all her life — until her party regained the majority in Congress in 2014 and proceeded, she said, “to do nothing. They did nothing on Obamacare, nothing on cutting spending, nothing on restoring honesty. They hate us, so now I’m done with Republicans. Trump is not one of them. He doesn’t hate us. He really believes we can make America great again, and I’m not an optimistic person, but I think he can, because he’s got a built-in ability to use the media, just like Obama.”

I don’t know why she thinks giving people access to health care is a bad thing, and I have no idea why she’s worried about government spending. I’m not really sure what kind of dishonesty is troubling her. But I understand that the Republicans made a bunch of promises, some of which they had no hope of keeping and others of which they had no true intention of actually delivering. It’s also clear that the folks in the so-called Republican “Establishment” are frustrated beyond endurance with people like Holly Martin who actually believed their bullshit and expected them to be effective. That she, and so many other voters like her, have no interest in Jeb Bush or Scott Walker or Marco Rubio makes them crazy, and it’s not too strong to say that the Establishment basically “hates” their own base of supporters.

So, she looks at Donald Trump and she sees in him someone who’s pretty effective in getting media attention and driving the national conversation and it looks like he’s a better bet to actually shake things up and make possible things that currently look impossible. It might be a Hail Mary pass, but what’s the alternative?

And is it really all that different from a similar sentiment on the left that looks to Bernie Sanders to create a “revolution” in the political climate that will make a progressive America possible?

Perhaps the main thing that is wrong with both sentiments is the inability to understand the role that political parties and Congress play in defining the limits of the possible. If you nominate a candidate that the party power players do not want to work with, you’re going to have a lot of problems trying to win the general election. And if you somehow manage to make that happen anyway, the new president will have to try to deliver on their promises with two antagonistic parties in Congress instead of the customary one.

Maybe that’s what you want because the two parties stink to high heaven and can’t work together anyway, but you shouldn’t invest much hope in the results. You’re creating a recipe for a failed presidency and hoping that it will somehow fix the system. Unfortunately, it’s more likely to create chaos.

What’s making this risk seem attractive is partly that a lot of folks don’t understand that they’re inviting chaos in the first place, but it’s mainly that things are already too chaotic. So, people think “What’s the difference, really?”

And it’s getting hard to argue with them.

I think most people are going to be more practical. Hillary Clinton may seem like more of the same to a lot of people despite the fact that she’d be the first woman president, but she also represents stability. Those factors, together, are probably enough to overcome this sense of frustration with the status quo, because things really aren’t as bad as they’re often made out to be. And, where they’re truly bad in a kind of unprecedented way is in the political sphere where the inability to act is being driven by dysfunction and divisions on the right.

Still, it’s an argument. And the folks who want to blow everything up and see what happens have a stronger case than they should. It’s the old thing about doing the same thing over and over again and hoping for a better result. That’s insane.

So, we’re kind of in the sad condition of picking between stupid and insane, or it at least appears that way too much of the time.

In this environment, the thing that’s neither stupid nor insane is to lower your expectations and follow the Hippocratic Oath, which is to first do no harm.