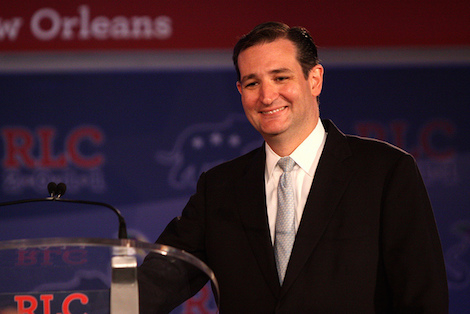 In a morning without much in the way of hard news, I became transfixed by Shane Goldmacher’s piece at Politico about the strange lassitude of Ted Cruz’s multiple Super-PACs, which are currently sitting on tens of millions of dollars which they are not spending, and moreover, have no particular plans to spend, at least as measured by reserved TV ad time. Goldmacher spends some time discussing the agony of the Cruz campaign proper, which seems to be sending “spend some money” signals to the Super-PACs that aren’t, somehow, being read.

Maybe that’s the actual story, though you don’t have to be a total cynic to doubt that the kind of people who run high-stakes political campaigns are piously observing the “no coordination” rules. More importantly, I cannot for the life of me figure out why presidential candidates and their handlers don’t write down a detailed Super-PAC manual of operations, with fifteen contingency plans for stuff that might happen, during the days before their formal announcements when they are free to coordinate to their heart’s desire. Maybe they actually do, in which case all the handwringing that Goldmacher reports is just play-acting or misdirection.

In any event, the most interesting thing about Cruz’ Super-PACs isn’t what they are and aren’t spending money on–it’s the two personalities that by all accounts control them.

The director of the most prominent Cruz Super-PAC (Keep the Promise I) is Kellyanne Conway, whose name and photograph appear in every encyclopedia entry for “Washington Insider.” After an education at Washington’s Trinity College and George Washington University School of Law and some training at the most prominent Washington GOP polling firm, Conway (then Kellyanne Fitzpatrick) suddenly became a regular TV presence in the mid-1990s, also doing the occasional fashion shoot and being seen here and there on dates with eligible bachelor Republican Members of Congress. She gradually became the preeminent Republican expert on the politics of talking about and appealing to women. No Republican congressional retreat was complete without Kellyanne holding a session on how to avoid saying stupid, sexist stuff.

One of Conway’s DC clients, unsurprisingly, was Newt Gingrich, which led to the misfortune of her serving as a senior strategist for the former Speaker’s 2012 presidential campaign.

I don’t know why she’s with Team Cruz–the Senator who is in the Senate in order to attack the Senate–this time around, but it’s probably not going to enhance her DC social calendar.

But it’s the other member of the Cruz Super-PAC duumvirate that makes Conway’s presence especially strange: “strategist” David Barton.

If Kellyanne Conway is a superstar in the claustrophobic world of Beltway Republicanism, Barton has some immense real-world credentials as more or less the brainwasher of an entire generation of conservative evangelicals. A pseudo-historian, Barton practically invented a revisionist tale of the Founders–including Thomas Jefferson–being determined to create a Christian Nation. That he has been regularly and increasingly discredited can’t detract from his role in creating and shaping the “constitutional conservatism” that animates much of the Republican Right these days.

Perhaps the Conway/Barton team is a problem, or maybe it reflects Cruz’ own dual existence as the champion debater and scholar of the Beltway Right and the son of a fiery backwoods preacher who is one of Barton’s disciples. If Cruz ultimately wins a primary, the celebration party could be quick the clash of cultures.