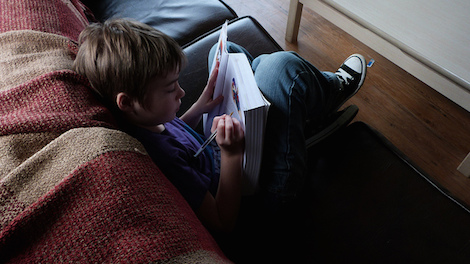 It’s a reductio ad absurdum case, to be sure, but there is an important point of clarification coming from a dispute in Texas over parents who aren’t teaching their home-schooled kids a whole lot because they all expect to get snatched up in the clouds with Jesus pretty soon. Seriously. Here’s the story from local TV station KRGV.

Laura McIntyre began educating her nine children more than a decade ago inside a vacant office at an El Paso motorcycle dealership she ran with her husband and other relatives.

Now the family is embroiled in a legal battle the Texas Supreme Court hears next week that could have broad implications on the nation’s booming home-school ranks. The McIntyres are accused of failing to teach their children educational basics because they were waiting to be transported to heaven with the second coming of Jesus Christ.

At issue: Where do religious liberty and parental rights to educate one’s own children stop and obligations to ensure home-schooled students ever actually learn something begin?

Like other Texas home-school families, Laura and her husband Michael McIntyre weren’t required to register with state or local educational officials. They also didn’t have to teach state-approved curriculums or give standardized tests.

But problems began when the dealership’s co-owner and Michael’s twin brother, Tracy, reported never seeing the children reading, working on math, using computers or doing much of anything educational except singing and playing instruments. He said he heard one of them say learning was unnecessary since “they were going to be raptured.”

Then, the family’s eldest daughter, 17-year-old Tori, ran away from home saying she wanted to return to school. She was placed in ninth grade, since officials weren’t sure she could handle higher-level work.

The El Paso school district eventually asked the McIntyres to provide proof that their children were being properly educated and even filed truancy charges that were later dropped. The family sued and had an appeals court rule against them, but now the case goes Monday to the all-Republican state Supreme Court.

Don’t know about you, but I grew up in the Bible Belt at a time when there were no loopholes in compulsory education laws to let kids stay at home. But that was not only before the home-schooling movement picked up steam, but also before the phenomenon of “segregation academies”–many of them church-based–undermined public support for public schools.

The ideological argument the McIntyres are appealing to (aside from “religious liberty,” of course) is that parents are the sole determinants of their children’s best interests. Unfortunately, according to that ideology the community’s interest in making sure those kids don’t grow up to be burdens on society is disregarded, along with the notion that children have rights parents cannot disregard.

But the reason I am drawing attention to this case is that many conservatives would like to extend this absolute valuation of parental rights to a system where the parents are giving taxpayer-financed vouchers they can use at the God’s Own Training Academy for Servant-Leader Men and Submissive Women or for offsetting home-schooling costs. Any suggestion that the use of taxpayer funds should involve accountability measures is treated as an insult to parents, of course, who are, in the words of Louisiana Gov. Bobby Jindal, “the best accountability system we have.”

Maybe so in many cases, but not when the parents think education is a distraction from the Rapture.