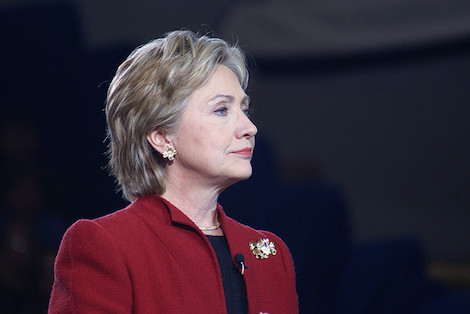 The League of Conservation Voters hasn’t endorsed a presidential candidate this early in the last thirty years. In January 2004, they gave John Kerry the nod, but only after he had won the votes of some caucus and primary voters. Yet, today, they came out in favor of Hillary Rodham Clinton.

The group’s president, Gene Karpinski, said it needs to activate volunteers and donors early to make sure Clinton is strongly positioned for the general election.

The LCV Action Fund picked Clinton over Sen. Bernie Sanders (Vt.) and former Maryland governor Martin O’Malley because “the stakes are so high” and Clinton “has proved she’s an effective leader who can stand up to the big polluters and push forward an aggressive plan to tackle climate change,” Karpinski said.

At least they waited until it was clear that Vice-President Joe Biden wouldn’t be a candidate, right? I mean, their rationale isn’t that Clinton has the strongest record on the environment. Their rationale is that they need to get an early start.

And that’s kind of odd, because no one is stopping them from talking to their members about the importance of a Democrat winning another term in the White House. For some reason, they think they need to convince their members that that Democrat must be Hillary Clinton. And it’s incredibly urgent, despite her B-minus lifetime rating.

The LCV scores all federal lawmakers on their voting records, and Clinton has an 82 percent lifetime record, compared with Sanders’s 95 percent. While the group does not evaluate governors, its state affiliate Maryland LCV issues occasional governor scorecards, and O’Malley received an A-minus rating for 2007-2008 and a B-plus for 2009-2011.

Now, sometimes you just want to do a favor for a politician whom you hope will win anyway and with whom you expect to work. An early endorsement gives the LCV a card to play with a future President Clinton. But if there’s really a need for such transactional behavior, the merits of the endorsement seem even more dubious.

The LCV has a lot of members, many of whom support other candidates or haven’t made up their minds. Not of all them appreciate seeing a thumb on the scale like this for the candidate with the poorest environmental record. A LCV spokesman justified their pick by arguing that Clinton’s rating had been harmed by missed votes the last time she ran for president. That’s undoubtedly true, and Clinton is running on a strong environmental platform. It might have been nice, however, to wait a bit and have more than one debate before the nation’s leading environmental lobbying group made an endorsement.