* Did anyone expect more than a photo-op out of the meeting between President Obama and Prime Minister Netanyahu today? I know I sure didn’t.

* NJ Gov. Chris Christie’s veto pen got a work out today. He rejected bills providing for automatic voter registration and an economic relief package for Atlantic City. I guess that gives him a lot of material to talk up his conservative bona fides at the Republican debate kiddy table tomorrow night.

* If you ever had any doubts about the importance of college sports (especially football) in American culture, you can feel free to banish them forever after the University of Missouri’s president resigned when football players threatened a walk-out over the schools lack of response to racist incidents on campus. Phillip Bump summed things up well:

For years, the debate over college athletics has centered on whether or not athletes should be paid. The fight at the University of Missouri reveals that the football team even at a less-lucrative school can exert significant political power. Which should make the administrations at those more-lucrative schools awfully nervous.

* Last week the federal prison population dropped to under 200,000 for the first time in 8 years.

* Perhaps Ben Carson could save us all a lot of time and trouble by listing the things he thinks are NOT the result of political correctness.

* Would it surprise you to learn that James Wolcott has written one of the most entertaining take-downs of Donald Trump?

* I really wish I’d had this poster on Saturday to go along with my article about the Republican embrace of anti-knowledge. 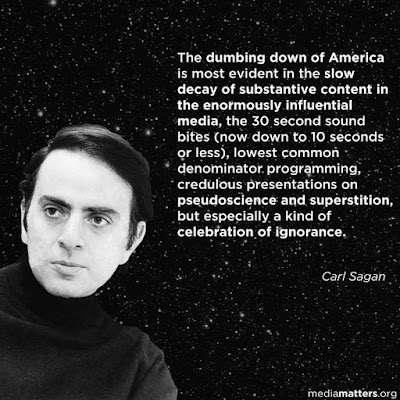 * Finally, our comment moderator Blue Girl tells me that her friend Carolyn Wonderland is celebrating a birthday today. So let’s take a listen…