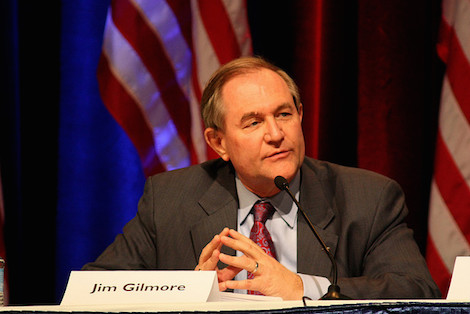 Jim Gilmore won’t be appearing in tonight’s main event or even on the undercard “kiddie table” debate that will feature such luminaries as Bobby Jindal and Little Ricky Santorum. He’s already assured that his name will be on the ballot in New Hampshire and South Carolina, though, so you can’t say that he’s not a real candidate.

You might have to shed a tear for the man as you listen to him whine about the unfairness of the system. He seems to think he can win the nomination anyway by doing a lot retail politicking on the ground in the Granite State, but I have my doubts.

“I have people in New Hampshire say, ‘Well, gee, I didn’t know you were running,’ well that’s right because Morning Joe isn’t Morning Joe, it’s Morning Trump,” he said. “That’s right, so this is an opportunity to get in here and become known, speak to the people of this state, offer my candidacy as to what I want to do for the people.”

“I’m not some weirdo that’s out here just kinda running crazy, I’m the former governor of the state of Virginia,” he continued. “I’m the former chairman of the Republican National Committee. I am world traveled, I not only have the credentials of being the chief executive of a state but I have deep foreign policy credentials. I am a United States army veteran. I was the governor during the 9/11 attack when the Pentagon was struck. I have the credentials to deal with foreign policy issues that the other former governors simply don’t have. So I have a right to come out here to tell the people of New Hampshire they ought to be supporting me and to campaign for it.”

He makes a decent case for himself, but has he ever separated conjoined twins or hosted a top-rated reality television show? Is he the son and brother of former presidents of the United States?

Hell, even Rand Paul has a father who has run for president (more than once), and Mike Huckabee can play the bass guitar and has Chuck Norris on speed-dial.

Still, Gilmore has a point. He is a former governor. And he never ran a Fortune 500 company into the ground. I also doubt that he’s completely broke.

So, I guess he figures he deserves better than to be excluded from the debates.

Really, though, I think the voters deserve better than a choice between these losers, Gilmore included.