* Congress has once again passed a National Defense Authorization Act that precludes President Obama from transferring Gitmo detainees to federal prisons in the U.S. The vote was veto-proof and the President plans to sign the bill. There have been many reports indicating that the administration will send a plan to Congress for how to close the facility sometime this week. So keep an eye on this one…it will be interesting to see how it all plays out.

* Sorry Jonathan Chait, but the term “political correctness” has been robbed of all meaning. You can thank people like Ben Carson for that. On the other hand, Harold Pollack over at Ten Miles Square is exactly right. Asking for some “muscle” to remove a journalist from a public space is simply wrong – regardless of what you call it.

* Over at Republic 3.0, Stephen Rose serves up a huge (or as The Donald would say, “YUUUUUGE”) helping of reality to challenge the rhetoric of the conservative anti-government crowd.

* Out Magazine has named President Obama “Ally of the Year.” It is the first time a sitting president has been the recipient that title.

In preparation for tonight’s Republican debate, here are a few stories you might want to check out:

* Brian Beutler tells us why Fox Business is the perfect venue for the Republican debate.

* Based on news coverage this week, you might expect that the target for most contenders on the big stage tonight would be Ben Carson. You’d probably be wrong. Not only is Cruz going after Rubio lately, so are Bush and Trump. Even Clinton is ready to get in on the action.

* Wouldn’t you love to be a fly on the wall to hear this one: “Bush team schedules post-debate call with donors.”

That’s it for debate prep. But before we close out for the day, here is a wonderful story for all of us that love this planet.

Peru on Sunday will officially declare Sierra del Divisor National Park, a 1.3 million hectare (3.3 million acre) reserve that is home to uncontacted indigenous tribes, endangered wildlife, and one of South America’s wildest landscapes. Sierra del Divisor, which is now one of the largest protected areas in Latin America, is being compared to Yellowstone National Park for its conservation significance and spectacular geological features. The creation of the park has involved dozens of partners, ranging from international conservation groups to local indigenous communities. It has also had wide support of the public. 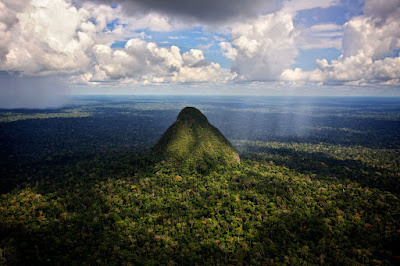