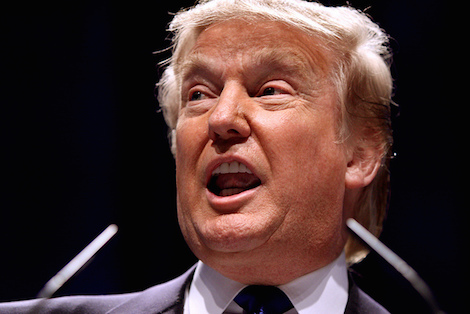 I watched the GOP debate tonight and I honestly don’t have much of a reaction. None of it made any sense. If I were to create a transcript from memory, it would look like I ripped it off from All in the Family. In other words, it would look a lot like this:

TRUMP: No bum that can’t speak poifect English oughta stay in this country…oughta be de-exported the hell outta here!

KASICH: (looks at Trump, then the camera) He’s got some grand strategy that he can’t revulge.

FIORINA: They’re picking bananas in Brazil and them Indians down there, they don’t care about what you look like.

RUBIO: (points at Fiorina) That woman is liable to come at you like a Doberman’s Pincher.

PAUL: (looks dismissively at Rubio) Don’t talk like an ignarosis.

BUSH: (says for no reason) Between here and Florida, ya got your original 48 states.

FIORINA: (turns to Bush) You made a certain referential remark there.

TRUMP: Sit right down there, seniorora.

CRUZ: (blurts out) The atheist religion don’t believe in the Bible!

CARSON: (sees something invisible on his podium) This is a Jewish cake! They give this to a Jewish kid before he gets circumscribed!

TRUMP: (gestures towards Carson) Raise him a Luferan if you want, raise him a Norman with 7 wives, a holy roller, a Seventh Day Adventurer…..

PAUL: I’d say that the Meathead (Carson) probably got magnesia and forgot where his mouth was.

KASICH: I’m half prostate in the heat.

FIORINA: The rules are written by the bureaucraps.

BUSH: It’s only the mercy of the lord I ain’t had a stroke already…and a coronary trombonus in the bargain.

PAUL: I hate to leave in the middle of all this hillerarity.

CARSON: (increasingly confused) Well, yous two may have come from monkeys and bamboons, but not me.

TRUMP: (needs attention) I work for myself. I’m what ya call an “entramanure.”

KASICH: (to Trump) You ain’t got no qualifidations.

CARSON: (blurts out) There is an invason of my privates!

BUSH: (considers his debate performance so far) I ain’t in a happy frame of mood.

CRUZ: I just want to take the opportunity to express my waddya call, gratitude and depreciation.

BUSH: (growing morose) One of these days I’m gonna dehead myself!

TRUMP: (to Bush) Stifle it, Edith!

In this context, it doesn’t make any sense to talk about who won. Nobody won.

Our nation is a joke.