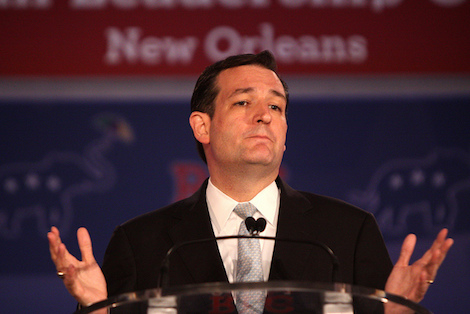 According to The Iowa Republican‘s Craig Robinson, today’s endorsement of Ted Cruz by Steve King was known well in advance, and is intended to kick off a week or so that will conclude with an endorsement of Cruz by Bob Vander Plaats and perhaps his whole Family Leader organization.

Robinson, who seems to have developed a strongly negative attitude towards Cruz, may be right when he says this will not “change the minds of an activist who is already backing a different conservative candidate like Huckabee, Jindal, or Santorum.” But I dunno: if I’m a Christian Right activist and a xenophobe living in Iowa, how could I resist the blandishments of the King of the Nativists, Steve King and the King-maker (who endorsed the last two Iowa Caucus leaders), Vander Plaats? It will certainly send up some media flares, amidst signs that the Paris terrorism attacks are giving fresh life to theories linking immigration to national security, an old theme for Cruz.

Then there is Cruz’s close relationship with another Christian Right potentate who will not endorse anyone but does have enormous influence in Iowa: American Renewal Project majordomo David Lane. And finally, the trump card: Cruz’s own father, the fiery Rev. Rafael, who has been smiting the wicked as a warm-up act for his son in Iowa and elsewhere.

I wonder if Craig Robinson is reflecting the hatred of Cruz–and that’s not too strong a word for it–that has spread from Congress to GOP elites everywhere. And if so, you have to ask if it’s communicable to likely caucus-goers–or maybe not.