When Kevin Drum and Jeb Bush agree about something, one of two grossly implausible events must have occurred: either Kevin is wrong or Jeb is right. Since Jeb’s wrong-headedness is more reliable than even Kevin’s good sense, a devout Bayesian in this situation will start out suspecting that Kevin has made one of his rare mistakes.

Some time ago – sorry, real life has been interfering with my blogging – the New York Times asked what seemed like a remarkably silly question: “If you could go back and kill Hitler as a baby, would you do it?”

The Huffington Post picked this up and asked it of JEB! by email. Bush (sensibly) ducked it until he was asked on camera, at which point he emitted a characteristically inarticulate grunt of affirmation. “Hell yeah, I would! You gotta step up, man.”

Kevin was more thoughtful but equally decisive:Â  “I’m not an especially bloodthirsty guy, but hell yes, I’d do it. Sure, maybe World War II would happen anyway, though that’s hardly inevitable. Maybe the Holocaust too. But even a reasonable chance of stopping either one of them would be well worth the life of a baby who would otherwise grow up to be a monster. What am I missing here? I wouldn’t even hesitate.”

I’m pleased to report another success for the Rev. Mr. Bayes. In my judgment (which I would be glad to pronounce ex cathedra if someone would just build me a cathedral) both Bush and Drum are obviously and catastrophically wrong. 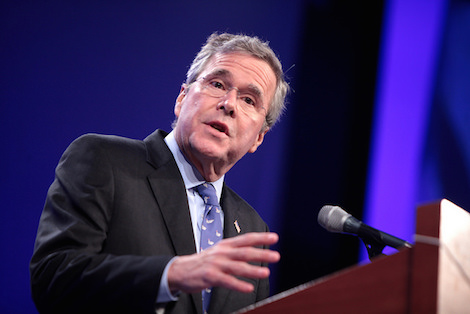 Forget about time-travel paradoxes, forget about the risk that something even worse would happen, and assume that your powers of foresight are perfect. You still shouldn’t kill Baby Hitler, for the simple reason that the Baby Hitler you’d be killing wouldn’t have done anything wrong, and intentionally killing innocent people is wrong, the same way torture and slavery are wrong. End of discussion.

A couple of points for those who would prefer a more leisurely exposition:

This whole thing reads like a reductio ad absurdum of the dimwit version of consequentialist ethics. I’m not surprised that a trick question caught Jeb Bush. But Kevin Drum should have known better.