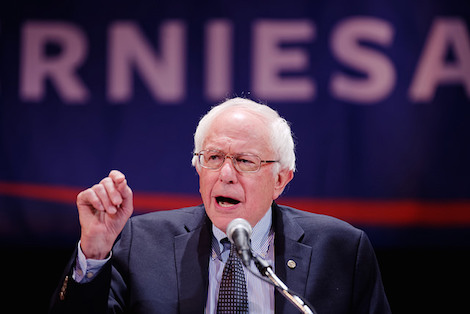 Read this lede from a report by Politico‘s Annie Karni and tell me what’s wrong with it:

Details about how Sanders would pay for his proposed single-payer national health insurance program to provide Medicare for all Americans have yet to be fleshed out — even though a July 30 post on his campaign website says the Vermont senator would file legislation on single-payer “perhaps as soon as next week.”

And with two-and-a-half months to go before the first votes of 2016 are cast, the candidate whose raison d’etre is ending income inequality has yet to unveil any details of his tax plan, such as whose tax rates would go up and by how much….

Sanders first told reporters that he was planning to deliver a “major speech” outlining his political philosophy in October. “I think we have some explaining to do,” he said, admitting the tag of Democratic socialism wrongly makes some people “very, very nervous.”

Don’t know about you, but the planted axiom that a single-payer health care system or a more progressive tax system represents “socialism” is absurd. Harry Truman proposed a single-payer system seventy years ago this Thursday, a few months before his “Iron Curtain” speech. As for tax rates, Karni does quote a Sanders staffer noting that the top tax rate was vastly higher under Ike; it was actually at 50% after St. Ronald Reagan’s first tax cut bill.

I understand why Sanders may feel stuck with the Democratic Socialist label, having embraced it in the past, and longs for an opportunity to take the horns off it. Most taxonomists would classify the New Deal and Great Society initiatives as “social democratic” (not the same thing as “socialist”), and might even distinguish that from “liberalism.” So he could just say he no longer thinks of himself as a “socialist,” or thinks the label is not worth fighting over.

But it may not matter in the end. Remember when RNC members had to be talked down from a 2009 resolution sponsored by antichoice and campaign finance ultra James Bopp to label the opposition party the “Democrat Socialist Party?” Now one of the GOP’s top applause/laugh lines is that all Democrats are socialists, and Bernie Sanders is the only one who’s honest about it. It’s within this context that Sanders should proceed with, or draw back from, a “socialism speech.”