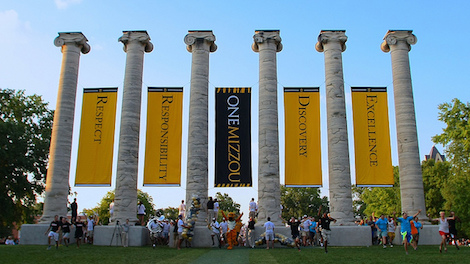 Speech isn’t the only matter on which student activists across college campuses are demanding change. But that’s how some professors are reducing the issue.

“The last thing many of these students want is real diversity,Â diversity of ideas,” said Alan Dershowitz, the political commentator and former law professor, while discussing student protests against racism at Yale University and the University of Missouri. Dershowitz added that we are “seeing a curtain of McCarthyism descend over many college campuses,” and “it was the college students who first started burning books during the Nazi regime. These students are book burners … ”

Dershowitz is among the privileged professors who are using the convenient loophole of free speech to thwart reasonable responses to blatant aggressions aimed at black and brown people on campus. But victims of hate aren’t policing speech; they are demanding an environment and community in which authentic learning can take place. Yes, if smearing a swastika of human feces — as at the University of Missouri — were an isolated issue, Dershowitz and others would have a case. If a Yale professor’s controversial email, which questioned administrators’ admonitions against culturally insensitive Halloween costumes, were really an unusual incident, then Dershowitz would be correct.

However, what professors see as inevitable and tolerable consequences of young people’s unfettered values colliding on the yard is more often an omen of a campus culture that has not shown an ability to create healthy learning environments for an ever-changing student body.

Faculty members tend to forget that many of higher education’s time honored traditions come out of rigidly Eurocentric and male curricula that was built to serve white men.

Student protests occurring all across the country including Ohio State, Yale and Claremont McKenna College in Claremont, California shouldn’t be boiled down and characterized as naÃ¯ve attacks against free speech. Protests are pushing against systems, practices and people who have not served non-traditional students well for far too long. Faculty can’t keep blaming students for racial disparities and hostile racial climates.

Related: OpinionÂ How can Mizzou heal? A 1996 campus incident offers some lessons about race

These numbers reflect more of the campus climate than of student preparation.

Thankfully, there’s research that offers a way to analyze the fullness of diversity on campus. Hurtado, Milem, Clayton-Pedersen, and Allen offered an organized way for campus leaders (students and faculty) to conceptualize the complicated issue of the campus climate for diversity. The framework consists of four dimensions of racial climate that institutions must consider. The four dimensions include the structural diversity of the institution, the historical legacy of inclusion or exclusion, the psychological climate, and the behavioral climate.

Structural diversity refers to the actual representation of people from different racial/ethnic groups, that is, the numbers and proportion of students, faculty and staff from different groups. Dershowitz said that students “may want superficial diversity, diversity of gender, diversity of color.” To dismiss these traits is to say people are ancillary. Ethnicity does bring different perspectives and communities that higher education institutions are entrusted to serve. Yes, diverse student bodies matter. But students come and go. What about the faculty?

Here is what the National Center for Education Statistics found:

Clearly, part of our diversity problem stems from an underrepresentation of everybody accept white people in the faculty.

Related: OpinionSurprised that college football players tackled bigotry on campus? Here’s why you shouldn’t be

The historical legacy of inclusion or exclusion refers to the legacy of limited access and exclusion that exists on many campuses and the effect it has on current educational practice. Vestiges of discrimination are immortalized and celebrated in the form of named buildings, endowed chairs, annual traditions, and commemorative portraits. Just look in your college yearbooks.

The psychological climate, in general, involves perceptions of racial/ethnic tension and discrimination, attitudes toward those who are different and the institutional response toward diversity. Yes institutions will have tension, but how will administrators and faculty deal with it? It is to be hoped administrators will provide a better response than the dean of students at Claremont McKenna College. Dean Mary Spellman responded to an op-ed written by Lisette Espinosa in The Student Life. Espinosa wrote about her experiences as a Latina student at a CMC. Spellman replied to the column by sending Espinosa this Oct. 25 email:

Thank you for writing and sharing this article with me. We have a lot to do as a college and community. Would you be willing to talk with me sometime about these issues? The are important to me and the DOS staff and we are working on how we can better serve students, especially those who don’t fit our CMC mold.

I would love to talk with you more.

Spellman has since resigned. But her letter provides a great introduction to the next quadrant of the framework. The behavioral climate consists of the nature of interactions across different racial and ethnic groups. We must remind ourselves that behaviors don’t just hurt people’s feelings. Research has shown that campus racial climate impacts academic success. A negative climate hurts black students’ GPAs, which can derail individuals’ chances toward graduation.

All of these elements of the framework are connected and interdependent, working together to shape the campus climate for racial/ethnic diversity.

The framework provides information that students and administrators can use to ground their understandings and beliefs on how campuses can more effectively address, examine and shape policy around the campus climate for diversity.

What professors like Dershowitz aren’t saying is that demands for diversity in the faculty, curricula, administration and programs threatens the most durable members of the campus community – the faculty. The most powerful and resistant people on campus aren’t football players or students. Faculty have maintained status quo for centuries.